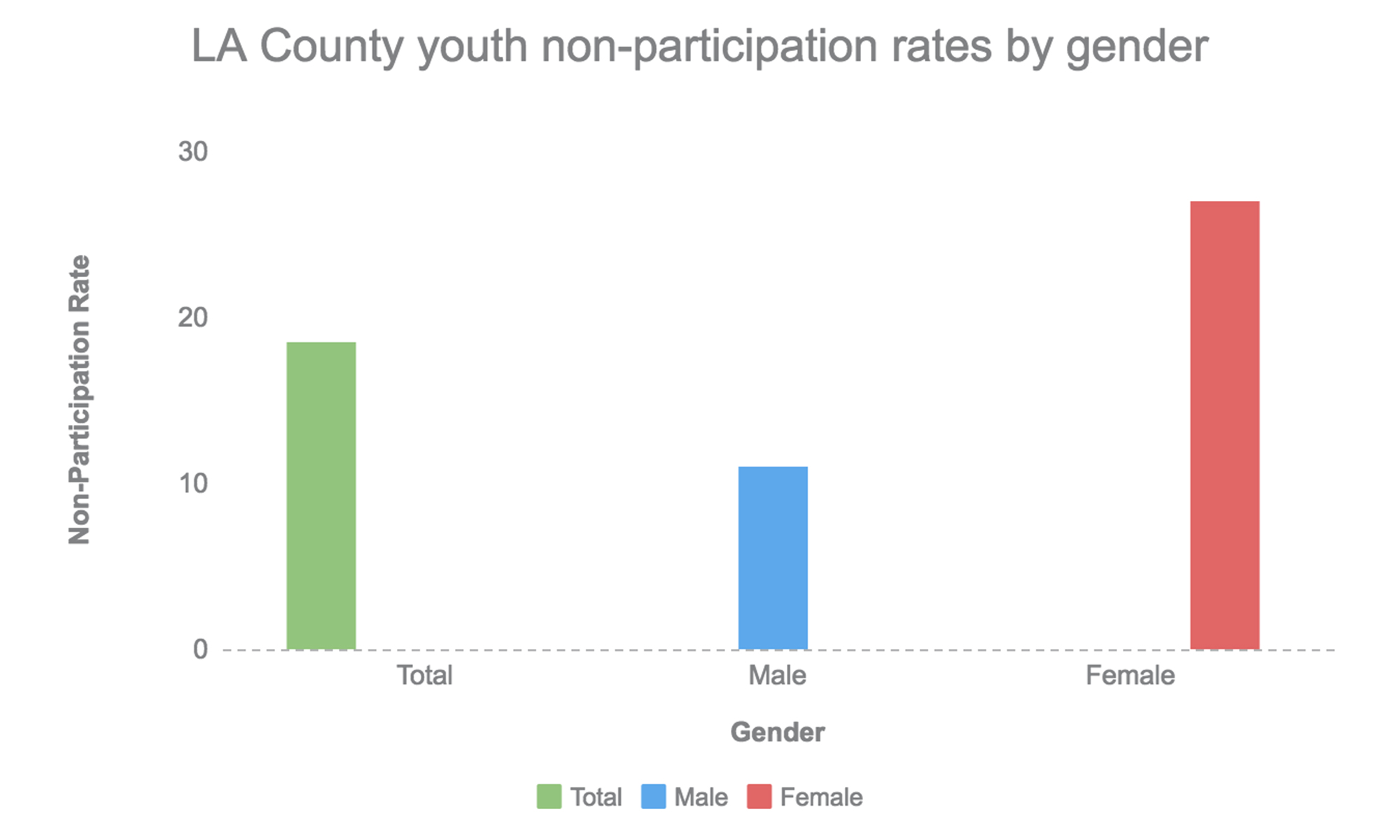 27 percent of girls were inactive in LA County compared to 11 percent of boys. 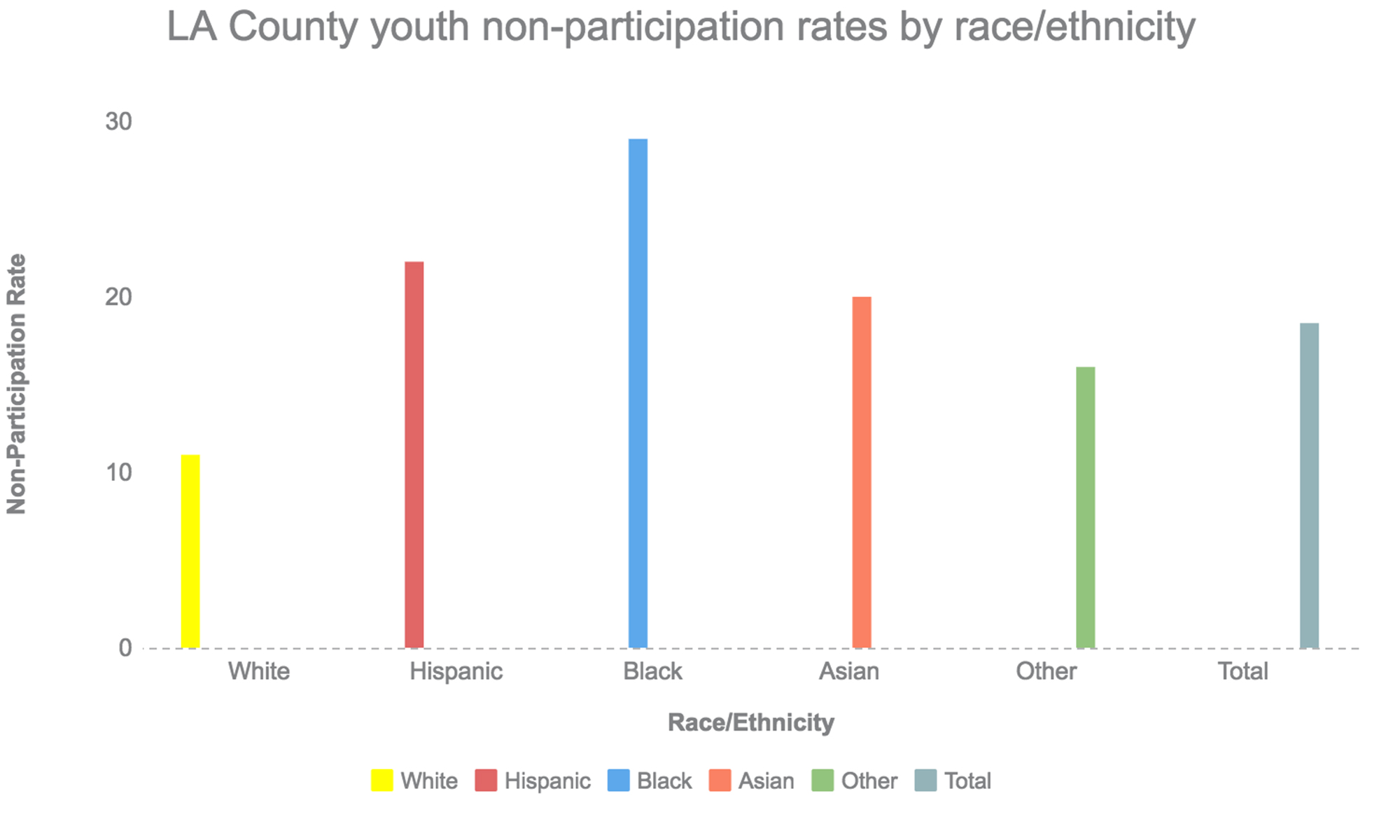 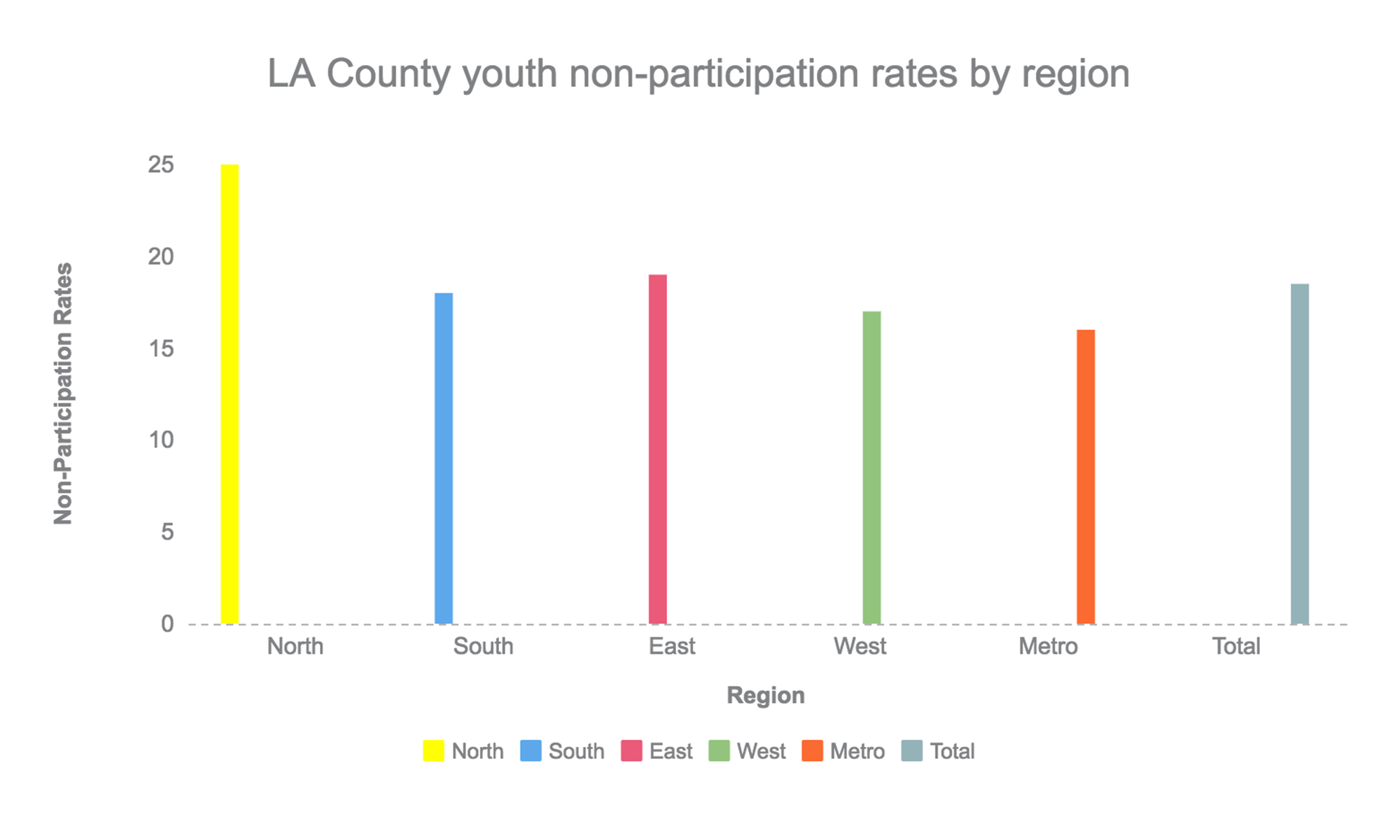 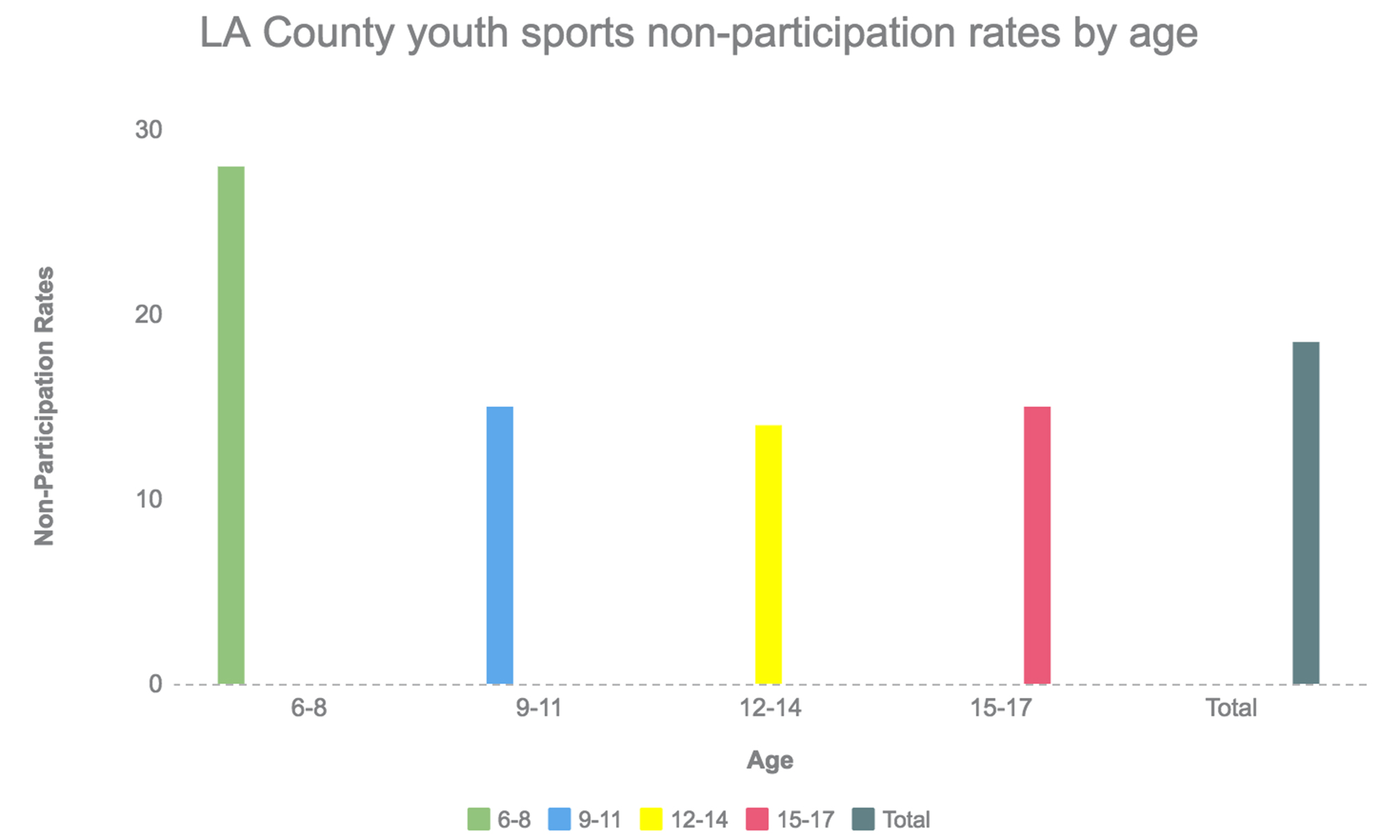 Children aged six to eight were the most inactive age group. 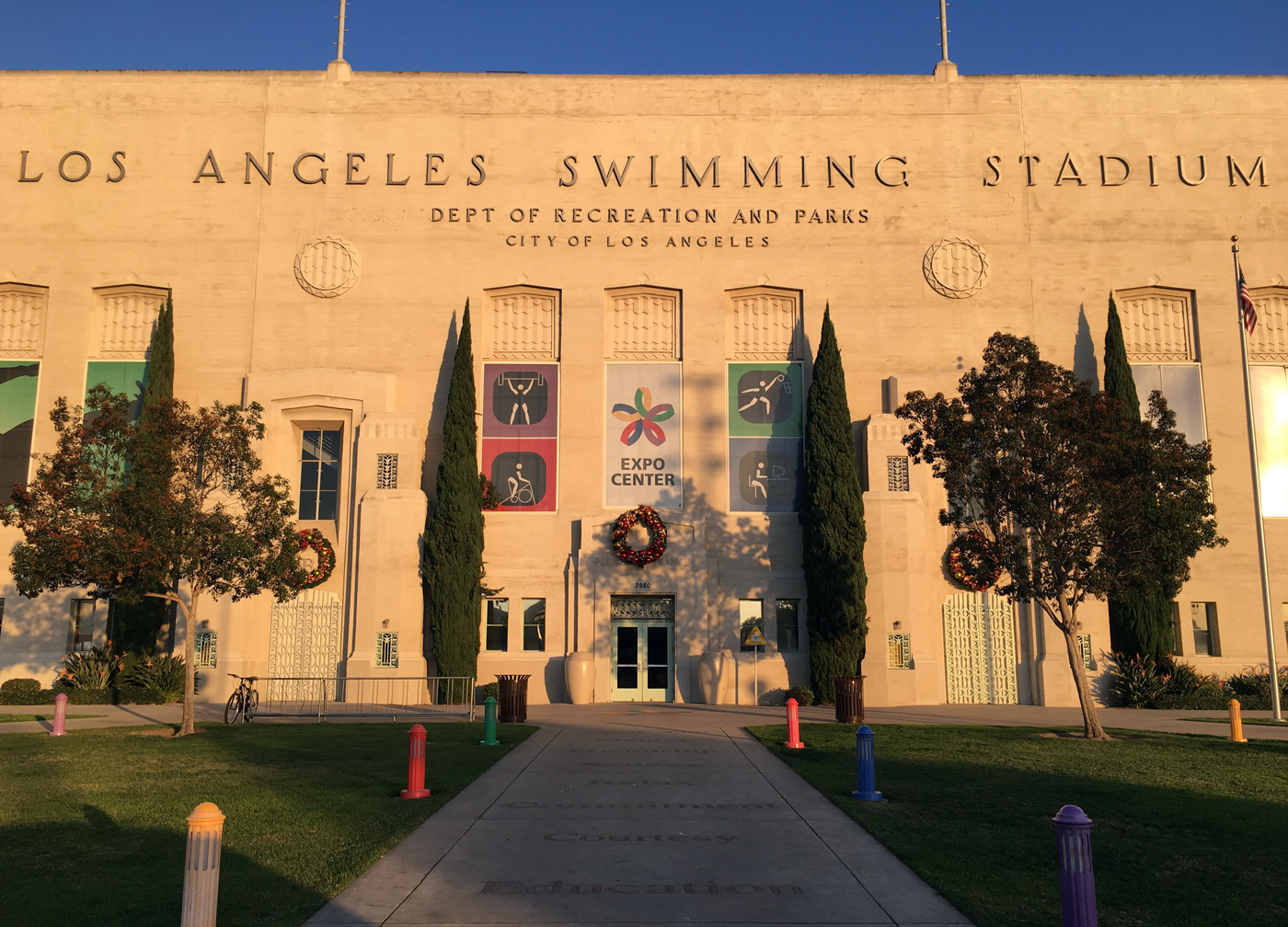 The EXPO Center, built for the 1932 LA Olympic Games, hosts a variety of youth sport programs, including Kids in Sports.

In October, the LA84 Foundation released an unprecedented research survey on youth sports participation in Los Angeles County. Despite ample research demonstrating the positive relationship between sports and youth development, the “LA84 Foundation Youth Sports Survey” found that 18.5 percent of children are inactive in the county.

The LA84 Foundation, a legacy of the 1984 Olympic Games, is a non-profit organization supporting youth sport programs, education and development throughout Southern California. While based in Jefferson Park’s historic Britt House, the Foundation is a nationally recognized leader in promoting youth sports. For over 30 years, the Foundation has granted an excess of $225 million, impacting more than 2,200 non-profit organizations and 3 million children.

The positive relationship between sports and youth development has been well documented, including demonstrated physical, social, emotional and academic benefits. For example, the California Dropout Research Project has proven a positive correlation between youth sports involvement and higher graduation rates.

Using the findings of its survey, the Foundation aims to increase participation and inclusion in youth sports throughout Southern California. While a lack of interest explains why some children don't play sports, barriers to participation, such as money, resources and accessibility, inhibit many others who want to be active.

“Historically, the Foundation… seeks to serve underrepresented and underserved populations,” said Wayne Wilson, LA84’s Vice President of educational services. “It’s our plan to continue to do that, and to probably place more emphasis on [these groups] than we have in the past.”

Kids in Sports (KIS), an LA84 grantee, is one non-profit organization working to provide affordable youth sports opportunities in South LA. The organization offers leagues in soccer, basketball, football and volleyball for as low as $25. However, the program's cost is not a barrier to participation. “If there is somebody who wants to play and can’t afford to do so, then [we allow] them to play,” said KIS Executive Director Monique Brandon.

Another major finding of the survey showed disproportionate gender non-participation rates. Compared to 11 percent of boys, 27 percent of girls were reportedly inactive.

“There’s a historical reality that girls traditionally play sports at lower rates than boys,” said Wilson, citing cultural expectations in certain communities. “The attitudes that led to that are changing and changing rapidly.”

The Foundation will make an increased effort to address girls as an underrepresented group, according to Wilson. KIS’ "Girls In Recreation, Leadership & Sports" (G.I.R.L.S.) program is one example of the Foundation’s current effort to target young women athletes.

In addition to studying the demographic makeup of youth sports participation, the Foundation’s survey also discovered LA County's most popular and most frequently played sports among active children.

LA’s most popular sports were soccer, swimming and basketball, according to the survey. However, the sport played most frequently by active children in LA County was none of those- skateboarding.

“I think there’s a lesson in that,” said Mark Hyman, a youth sports expert at George Washington University who spoke at LA84’s annual summit last month. “[Skateboarding’s] a sport where you don’t have to get in a car and drive across town, you don’t need a lot of equipment, and you don’t need seven other people.”

Hyman is referring to arguably the biggest barrier to youth sports in LA County: field space. For example, despite soccer being LA’s most popular sport, there are only four public soccer fields in the county per every 100,000 residents, according to the LA County Parks & Recreation Needs Assessment.

As a result of limited field access, LA youth sports organizations are forced to compete for space, driving up their programs' costs. “What this means is that most youth organizations charge a fee,” said Wilson. “The bigger the separation is between a fee and a family’s ability to pay, then there’s a lower likelihood that kid will be able to participate.” Per every 100,000 residents, LA County has only four public soccer fields. 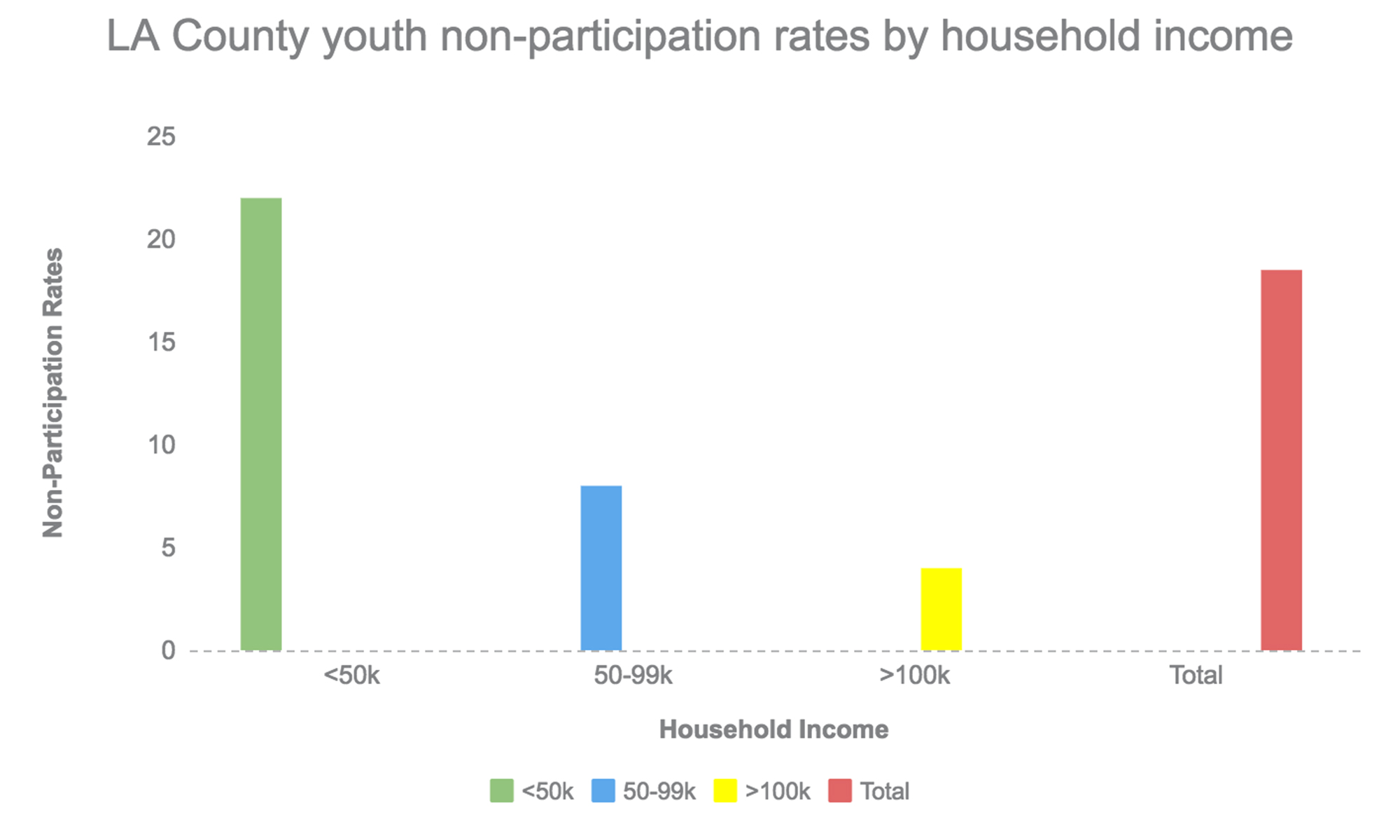 “What this means is that most youth organizations charge a fee,” said Wilson. “The bigger the separation is between a fee and a family’s ability to pay, then there’s a lower likelihood that kid will be able to participate.”

“There are certain people within the community who won’t go to a particular park because there is a gang associated with that park or around it,” Keith Johnson said.

In response to safety concerns from parents, Johnson moved FYFS’s practice facilities from a public park to an LAUSD field a few years ago. Consequently, Johnson was forced to pay nearly $3,000 more per season just for practice space. 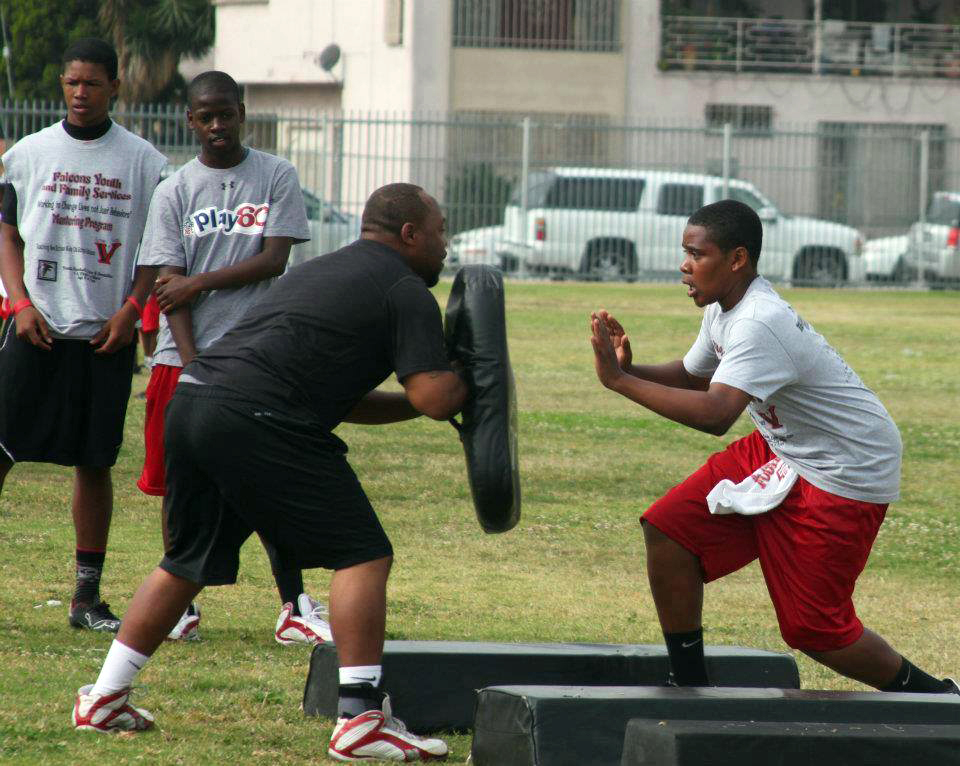 Coach Rogers of Falcons Youth and Family Services runs a blocking drill at a tackle-football practice.

Now that the lack of public park space is known to be a problem, youth sports organizations will have to find a solution.