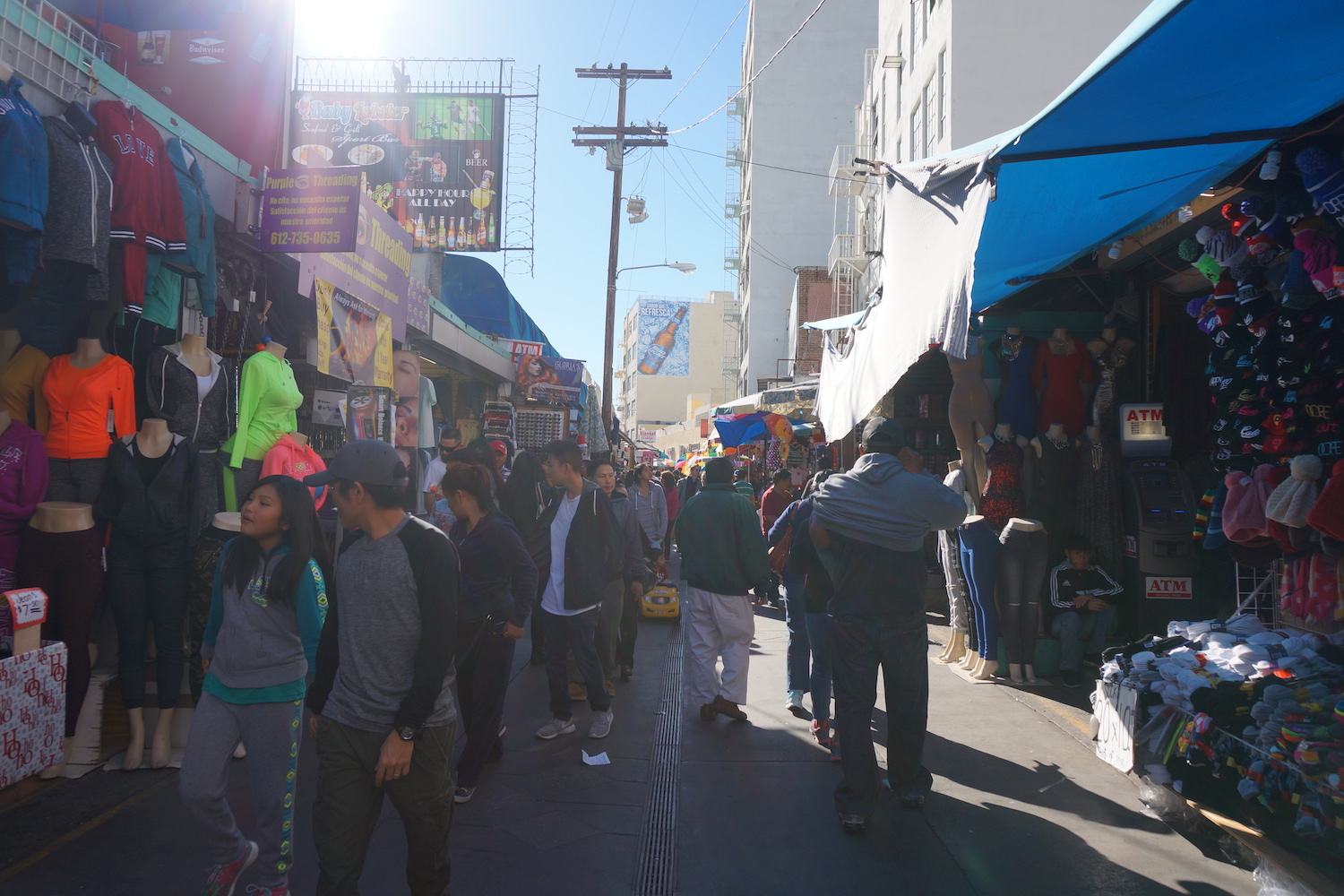 It’s easy to get lost within the borders of 16th Street, Eighth Street, Santee Street, and Central Avenue. Once inside the Los Angeles Fashion District, one is fully immersed in textiles, menswear, womenswear, flowers, piñatas, and so much more. Covering about 500 acres or more, the Los Angeles District has made a name for itself. People from around the world to neighboring cities come out to buy clothes among other things.

With so much to cover and so many areas of concentration, it can be easy to see things as one big place. But things can be much more separated. When it comes to clothing there are two different aspects of it: retail and wholesale. Wholesale means retailers can come to the area, usually with a retail permit, and buy in large quantities for their stores. In the retail business, there is no minimum or maximum of items a customer can purchase, and no permit is needed.

With wholesale making up 80 percent of the Fashion District—retail can seem like a small business. Most retail businesses are located in the Fashion District’s infamous Santee Alley and surrounding areas. Although there is no exact data on the how the two compare, many who work within both areas can instantly tell the difference.

With over 150 stores, Santee Alley can seem like a big place—at least to some people.

Luis Hernandez, a worker for a fruit vendor, said it’s the place to be at. “These are the famous Callejones. There’s more sales and commerce going on here.” In Spanish, Santee Alley is usually referred to as Los Callejones. Hernandez was attracted to this part of the Fashion District because he knows people come here, which to him means business. Although he just started working in the area three months ago, he said the wholesale business doesn’t catch word here. “I’ve heard about the wholesale side and all that stuff. But I don’t see it grab attention the way some of the stuff here does.” And he isn’t the only one who sees things like this.

Jesus Pocasangre, a paletero or ice cream man, has been posted near Santee Alley for ten years now. He’s aware the two types of businesses bring different crowds, but in the end Los Callejones brings larger crowds. “There’s so many stores here, and so many of them sell so much. Wholesale is a different, but this is [Santee Alley], it’s the way to go.” He mentioned he also enjoys this area more because of the culture. Most wholesale owners are Asian, according to the Korean American Apparel Manufactures Association. “The culture here is dominated by Latino, and as one I like that idea.” 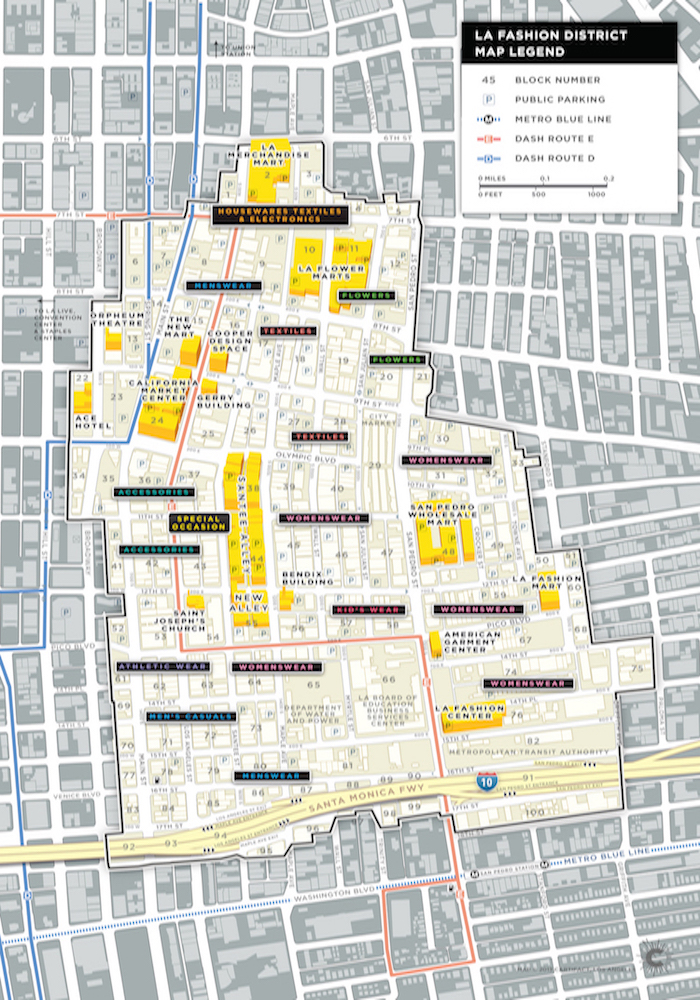 Within Santee Alley, there are very few wholesale stores. Maribel Madera, manager of Madera Fashion, is one of them. Her business has been in the same place for more than 10 years. Madera said before Santee Alley wasn’t just retail, there were many wholesale businesses. “Before, you would see wholesale and retail side-by-side. But now many of them moved passed San Pedro Street.” Her business is both wholesale and retail, one of the few that stands within the alley. “There was a lot of movement going on once they started to make more building that way [passed San Pedro Street]. I decided to stay here.” She said lately her store has been focusing on retail because of the change of atmosphere in the area.

Aside from the flow of business, many of those who work within Santee Alley, and even surrounding areas, felt they had it better off than those working in wholesale—mainly because the two don’t usually interact and retail is all they see.

But many of them don’t know the majority of the district is wholesale. However, those on the wholesale end easily believed it and knew it. The area itself has over 2,000 stores, a huge difference compared to Santee Alley’s 150 stores.

A few months ago, there had been talk about many stores moving to Texas for economic reasons. Although this is true for few stores, some owners and workers have hope in the wholesale business within the district. Yael Babazades, a worker at Sorrento wholesale, said the area has good business and the fact that there is very limited retail doesn’t hurt them. “There’s good business here. This area isn’t meant for retail and that is what draws people.” Babazades also brings up that those who work on the other side (meaning Santee Alley and surrounding areas), are usually open all the time and running all the time. The wholesale business has a different schedule that allowed it to keep a good business routine. “We are one of the few stores that open during the weekend, but this is extra. Stores sometimes are closed the whole weekend because they can afford it.” During the week, most stores are open until 6, which is similar to other stores in and near Santee Alley. The big difference usually comes on the weekends. Most wholesale stores are open Saturday 7 a.m. to 11 p.m. only, while places like Santee Alley are known for being open everyday.

Daniela Melendez, a student studying fashion and design, has her own shops set up around the wholesale area. She, like Babazades, has the same take when retail and wholesale areas are compared. The way she sees things, wholesale has more business, which for her means more customers. “There’s a different crowd of people and sometimes people need permits, but that doesn’t mean we get less business.” The way she sees it, wholesale is very distinctive and at times exclusive, while retail is open to everyone.

From the outside, the Fashion District can all seem as one, but in reality it can be very separated. Divided into various sections, clothing is split in two—retail and wholesale. Although walking distance from each other, the two sections have served different purposes. In addition to different purposes, the people who work in them see two different atmospheres, cultures, and business.

To find out more about the Fashion District, click the photos below! 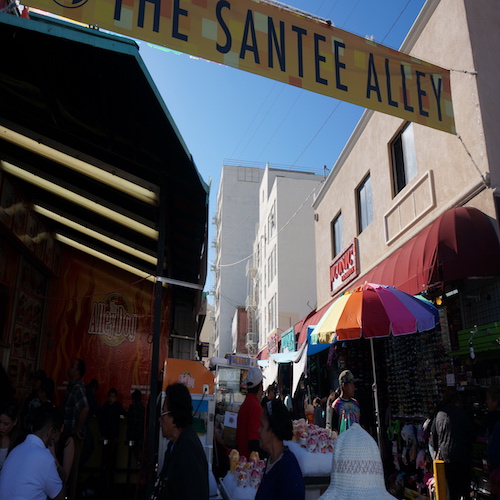 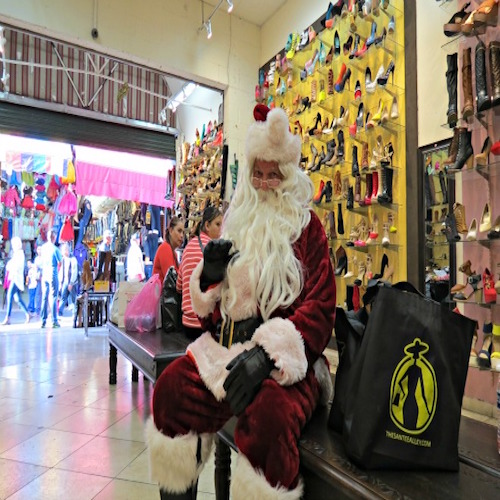