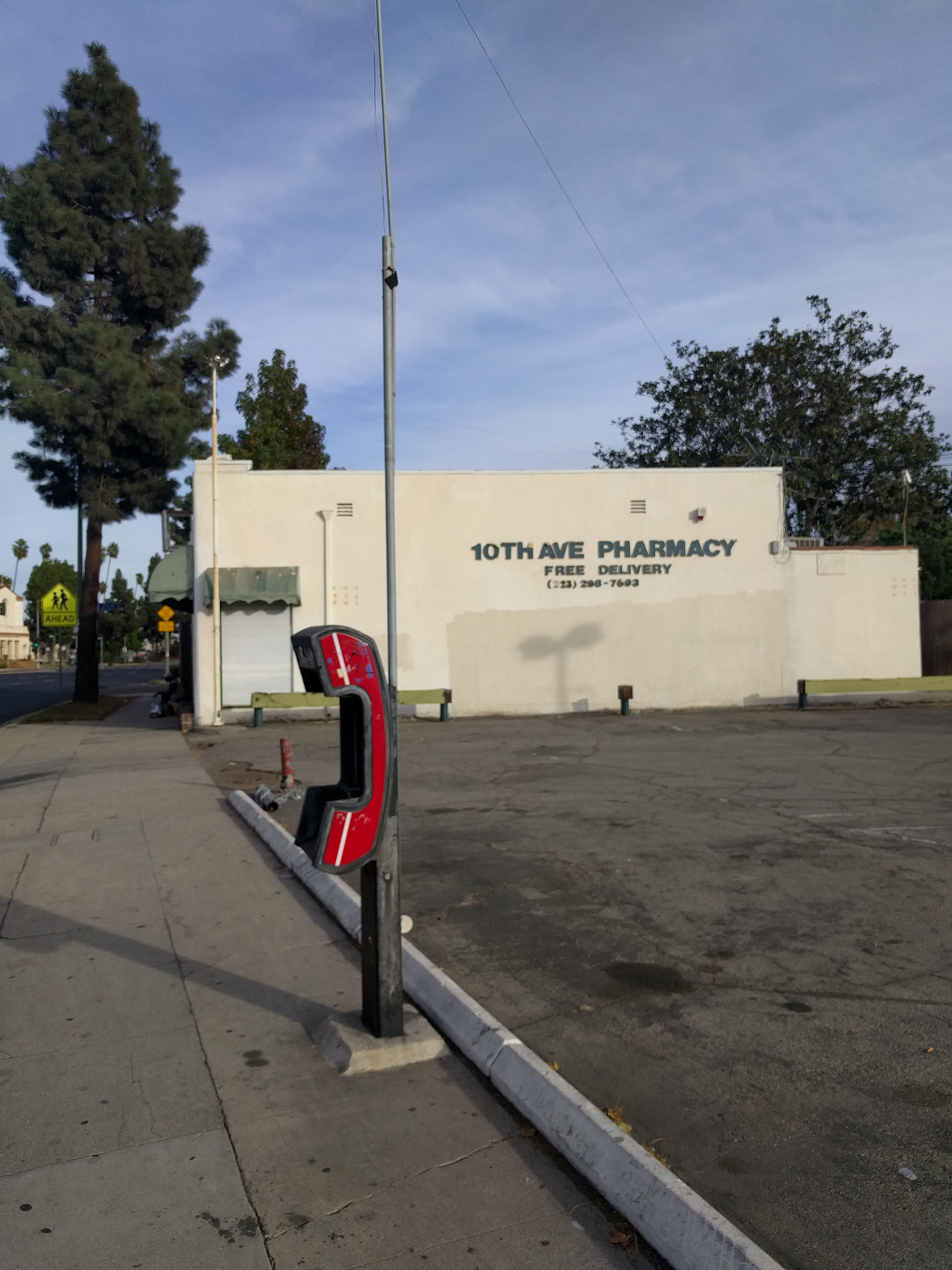 Leimert Park is a community built on conversations.

Whether it’s the lifelong friends meeting up at the reggae booth to talk about their kids or the married couple dancing to the sounds of African music, the historic black neighborhood relies heavily upon the word of mouth.

It is not these weekly editions of The Wave or The LA-Watts Times that tell him the most about his community.

But, rather, the traditional African thumping of cowhide strapped to a wooden drum that tells him the good news of Leimert Park.

“Honestly, first we get it through the drums. Then we get it through social media and then our local papers. But I’m serious about the drums, that’s why we play the drums on Sunday: to send out the news that things are well,” Ta’le-sakani said. “We want people, no matter what your race is, to be down here with us. Why? Because the drums are our heartbeat. They are the heartbeat of the community.”

Despite being a part of Los Angeles, a city of over four million people, Leimert Park still preaches hometown values.

A big part of the communication infrastructure for the area is the Leimert Park Village and the farmer’s market, a Sunday tradition that features the rhythmic sounds of bongos and djembes, intoxicating aroma of grilled cuisine and a “everybody knows each other” attitude only found in small towns.

Local artist and street vendor Willie Young sells his artwork along Leimert’s famed Degnan Avenue, often starting up conversations with his customers about the latest gossip around town.

Local resident Osayande Ta’le-sakani speaks about his experience with the Leimert Park Farmer's Market and how the local papers in Leimert provide better coverage than regional publications. To read the captions, make sure to click on the "CC" button on the YouTube player.

“The whole community is right here in this epicenter. It’s like having Regis and Kelly right here in the park every Sunday. You never go a Sunday without hearing what’s good in the community,” Young said. “Often times I learn more from selling my artwork than I do watching the news because the news doesn’t cover Leimert Park. The people here have an ear to the ground.”

Rather than other cities where journalists and government officials do the talking, it is the people of Leimert Park who make the news.

Leimert Park resident Jeff Workinger was outside of the Ora Lee and Bubba’s Bookstore last Thursday night for a book signing with a couple of his friends. Despite being born and raised in Long Beach, Workinger appreciates the way residents rely heavily on interpersonal communication.

“I’ve been here for a couple of years now and can definitely say that the village and the streets are our newspapers. If you want to know something, you can go to social media. But, we all know that social media really isn’t the truth. If you want honesty, you go to the village on Sundays, or even just hang out with your friends from the community,” Workinger said. “In-person social networks are a huge part of life in this community and if you have friends, you’re already pretty connected.”

Older residents aren’t as accustomed to utilizing technology for communication purposes, while younger residents and children of the area are constantly on their phones.

A social media that remains a constant for all residents, and business owners in particular, is Facebook. Oma Ade, owner of the recently-opened RideOn! bicycle shop on Degnan Avenue, uses Facebook as a tool to bring in customers and establish relationships.

“Social media is a huge avenue for my shop. A lot of the younger generation finds out about their news through their phones and so you have to go where the people want to go,” Ade said. “I know that sometimes people post flyers to get their businesses out there, but for me I like to be able to interact with my customers.”

As the owner of Queen Aminah’s, Muhammad will not only offer an African-Islam paper The Final Call at the front of his store, but he will also post flyers for his shop around the Leimert Park Village to help spread the word.

“We are a store inspired by the nation of Islam, so we always have the Islamic word for everyone to read in the front of our store. I cannot relate with what other papers say, so I read The Final Call instead,” Muhammad said. “The business relies a lot on word of mouth. We’re really old-fashioned in the sense that we like to invite people in to experience the shop rather than look it up on their computers. To experience a person is an unforgettable choice one must make.”

Aside from Leimert Park’s reliance on physical conversations and social media giant Facebook, the neighborhood has also bought into a new community-based website and mobile application called Nextdoor.

Originally founded in 2010 and initially released in European countries, the application has spread to cities and communities all across the United States and is now valued at $1.5 billion.

For young residents like Tanasha Grice, Nextdoor provides a place to discover things about Leimert Park that Facebook can’t provide.

“Next Door is great. I’m not sure if all of the stuff on there can really be considered ‘news’ or anything like that, but it can be helpful when you’re trying to find out quick information,” Grice said. “I actually learned about the farmer’s market because somebody on Nextdoor posted about it.”

Learn about Nextdoor, the app that some residents think could be the future of community-based technology.

Although some residents appreciate Nextdoor’s updates on community events, job postings and yard sales, other residents say that the app can be abusive to the neighborhood’s overall image.

Gloria Jefferson, a resident in Leimert Park since 1998, believes that Nextdoor is not an app to connect the community, but rather a symbol of the gentrification that most residents fear.

“It’s funny you mentioned Nextdoor because the original Leimert Park residents think of that app as a white people invention, not necessarily a black people thing,” Jefferson said. “You’ll see noise complaints on there about the drums or they will ask why they can’t find parking. I personally don’t use the app, but there will be a lot of stuff on there that you can tell, the person who wrote it isn’t from the area and probably never even comes out here.”

Although residents may fear gentrification, the one place they will always feel at home is the Leimert Park Village.

It is here at the village and the farmer’s market that friendships are formed and the community is strengthened.

Ta’le-sakani expects the people in the village to change, but, like every Sunday afternoon, anticipates the drums to the thumping and the conversation to be flowing.

“This park is the only place in this community where anybody can come and be accepted,” Ta’le-sakani said. “I’m not a religious man, but coming here, reading my paper, talking to my friends and listening to the music is like church for me. They will have to go through me if anybody ever did anything to it.”