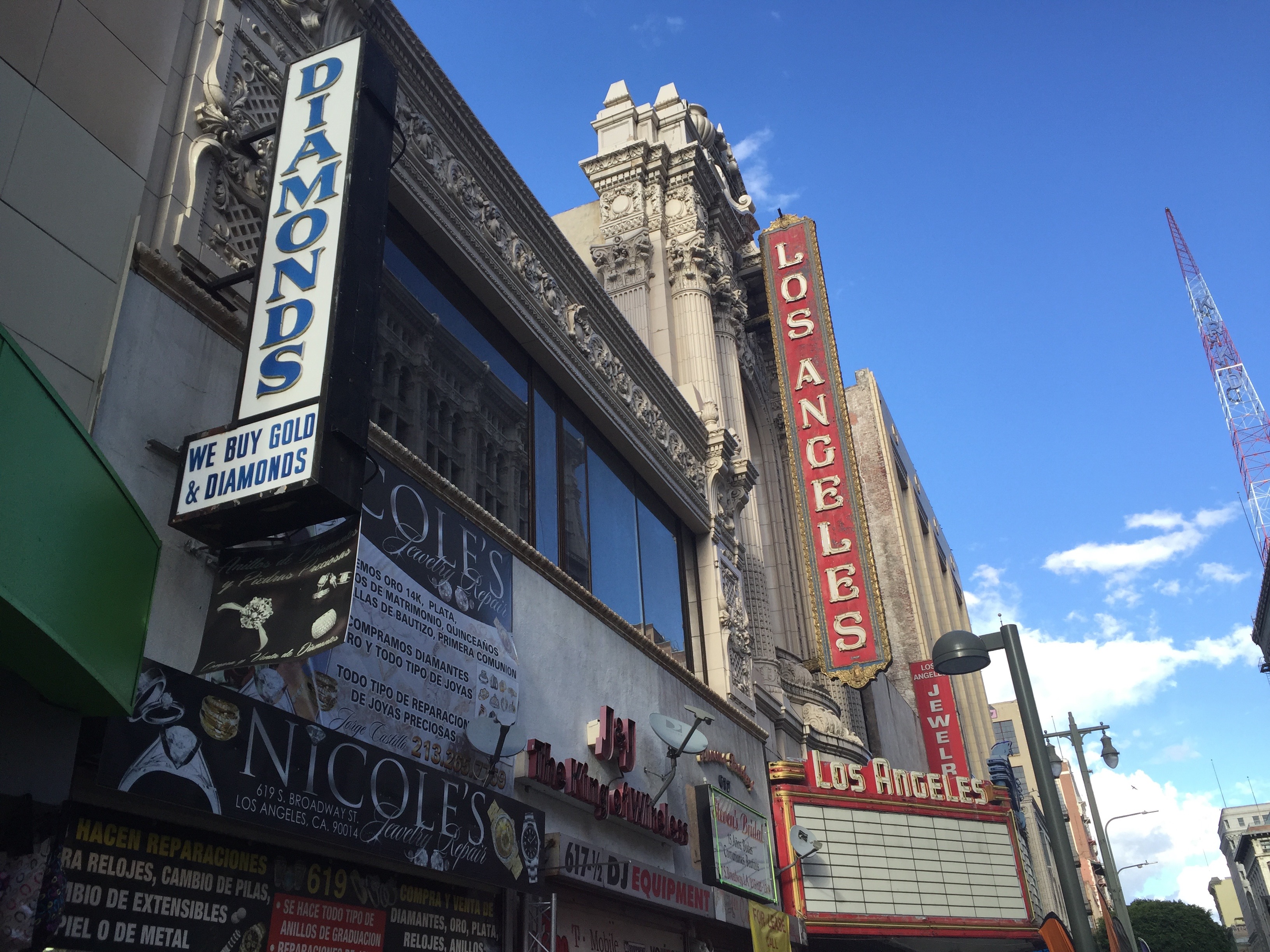 On downtown Los Angeles’ Broadway, music floats out of bargain retail outlets that stand with doors thrown open to the sidewalk, owners encouraging passersby to examine their wares. However, sandwiched between the stores stand several of the city’s oldest theatres, ready to return to their former glory.

Broadway, situated between the neighborhood’s jewelry district and its financial core, is home to a dozen theatres built between the 1900s and 1930s. In those days, the street’s vibrancy rivaled that of its New York namesake. However, the district lost much of its vitality in the 1980s and 1990s.

Recently, groups such as the Los Angeles Historic Theatre Foundation (LAHTF) and the Bringing Back Broadway initiative have banded together with theatre owners to revive these historic vaudeville houses.

In some cases, Norton and the foundation have helped movie houses reopen as venues and auditoriums. In others, the empty spaces have become retail outlets. When Urban Outfitters announced its intention to repurpose the Rialto Theatre in 2013, the LAHTF met with the retail chain to help with preservation and restoration of the marquee. Despite the venue’s new use, Norton applauded the company’s efforts to preserve the building’s history.

The LAHTF and the Bringing Back Broadway initiative also worked closely with French entrepreneur Erik Chol to transform the Globe Theatre into a multipurpose venue. Chol purchased the theatre in 2012 and celebrated its grand opening with a ribbon-cutting ceremony on July 30th of this year.

Chol visited between 50 and 60 Los Angeles venues in his search for a business, but he immediately knew the Globe was where he wanted to invest.

“If I don’t have goose bumps, I don’t sign the deal,” he added, emphasizing how excited he was to be part of downtown LA’s transition. “I fell in love with the American way of life. You always have a solution.”

Sitting in a dark office on the balcony overlooking the main floor of the venue, harsh light streaming in from the open fire escape leading to the back entrance, Chol studies his calendar intently. Although the theatre is not yet profitable, he has already booked concerts, live art events and a 70-member choir.

“It’s perfect for all kinds of shows; action is everywhere. Spectators become actors in the process,” he said of the multi-event venue, which can also be rented out for private parties.

According to Norton, the sense of community that attracted Chol to the Globe is necessary for the historic bloc’s resurgence in business.

“The value of a theatre district is in the collective mass of theatres,” said Norton, who also said that for theatre owners to “look at themselves as an island is a missed opportunity.”

Recently, the LAHTF has made strides in preserving Broadway’s historic theatres. The group has worked with councilman Jose Huizar’s Bringing Back Broadway initiative since its inception, and according to Norton the collaboration has gone smoothly. However, he noted that while the Bringing Back Broadway group’s goal is to draw business to the street, the LAHTF focuses more on preserving the theatres for the community.

In some cases, such as when owners intend to play movies and shows, preservation makes sense. However, repurposed venues are different. Although the Globe removed the seats to clear the venue’s floor, among other changes, Chol was adamant that many historical aspects of the theatre remain.

Many other historic movie houses have been making strides toward preservation to promote business on their own. Edward Baney has managed the Palace, Los Angeles and Tower Theatres for four years under the Broadway Theatre Group, and has seen significant changes in their appearance and popularity.

Baney’s descriptions of the theatres’ conditions during the 1990s paint a picture that stands in sharp contrast to the ornate palaces that he operates today.

According to Baney, the decor in places as insignificant as the ladies' room was intended to keep people in the building as long as possible.

“Back in 1993 […] it was pretty rough downtown. There were people living in the theatre, there were birds living here,” he said of the Los Angeles Theatre. Of the Palace, he said, “It was much worse. You had to hold your breath in here. It was bad.”

While the Los Angeles Theatre has slowly made small improvements over the years, the Palace went through a six-month, $1 million restoration process in 2001. The Palace earns most of its revenue from live performances and film screenings, but it has also been used as a filming location for productions that include "Whiplash", "The Big Lebowski" and "Scandal".

In the Los Angeles Theatre, 65 percent of revenue comes from film shoots, according to Baney. However, income has increased as a result of live performances, especially with the recent drop in filming in LA overall.

“Now that we’re doing more events, concerts and screenings it’s sort of filling the void,” said Baney, who predicted that the theatres he managed would start putting on their own productions within two years.

View Historic Theaters of Broadway in a full screen map

Despite the success of these theatres, he said the Bringing Back Broadway initiative has played a minimal role in their comebacks, mostly helping with press for performances and screenings.

All the parties involved with Broadway's historic venues have their own objectives, but they each share a common passion for the community. While the preservation of the theatres’ history is significant, even Norton admits that the most important factor in their renovation is the ability to draw audiences.

“We advocate for the best use in keeping the theatre alive,” said Norton. “The active use of the building is just as important [as preservation] in our opinion. We want them to be living, breathing successful businesses.”

While most theatres are far from turning a profit, their restorations have preserved a part of the city’s history and have boosted business on Broadway.