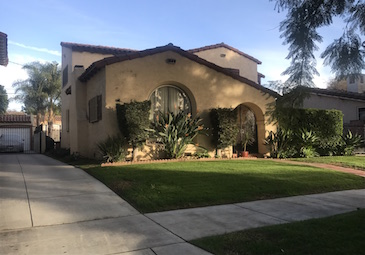 The diversity of homes within Leimert Park is appealing to prospective homeowners. 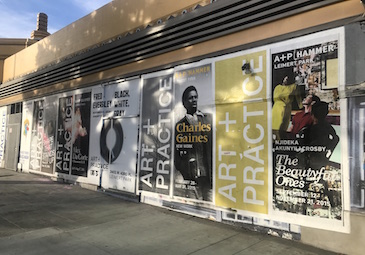 When it comes to performing arts in the Southland, Leimert Park reigns supreme. 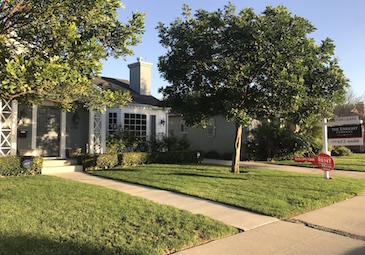 Renting has become the most-popular method of home ownership in Leimert Park. 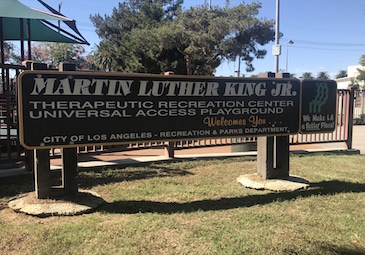 Parks like that of Dr. Martin Luther King Jr. are popular amongst Leimert Park residents. 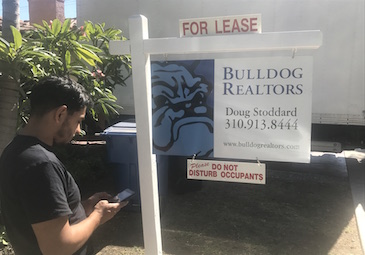 Scenes like the one above are becoming more popular as youthful residents flow to Leimert Park. Despite being just a couple of miles away from bustling Downtown Los Angeles, Leimert Park preserves a suburban feel.

A stroll through the residential areas of Leimert Park is full of eye-catching visuals. While the housing can get repetitive at times, with lots of spanish-style homes mirroring one another, a quick look upwards will grant you a view of the Hollywood sign standing vibrant in the distance.

If you find yourself on Leimert Boulevard, you will encounter a vibrant town center that is full of arts and culture. With murals on the walls, performing arts centers and the trademark Vision Theatre tower reaching to the sky, it’s very apparent that the arts are hallowed in this community.

And for young professionals like 26-year-old Alex Hsiung, an area like Leimert Park is a treasure of a place to live in. Hsiung, whose work as a business consultant often carries him into the heart of Downtown Los Angeles, loves being a new resident in Leimert Park because of its prime location. In addition to its location, Hsiung feels that he, as an Asian man, has been able to work himself into the social fabric of the predominantly-African American community quite comfortably over the past months.

“I’m very happy with the choice I made to [become a renter] here in this area. I used to live in West Los Angeles, but I was paying way more for an apartment in that area than I am paying to rent out a larger property here [in Leimert Park],” said Hsiung. “The area’s nice, I’ve really got no complaints about the community or people here.”

Leimert Park’s status as a real estate honey-hole has been further cemented in recent years. Since 2010, local realtors have reported a 44 percent spike in property values in the Leimert Park area. It is apparent that the real estate market has responded accordingly to the prosperity of Leimert Park, and now many housing professionals are rushing to involve themselves with this specific region of Los Angeles county.

Dino Buiatti is a realtor in the Greater Los Angeles Area who has an office in West Adams. In an interview with the Los Angeles Times , Buiatti spoke about communities like Leimert Park, which are currently experiencing an uptick in property prices and young individuals moving into the area.

Buiatti told the Times , “In the next five, 10, 15 years, the whole neighborhood is going to change … There is a lot of money being poured into the area.”

Buiatti has since opened a realty office and hired over 30 agents to work with housing stakeholders in areas like Leimert Park and beyond.

Like Hsiung, many young professionals have simply been priced out of prime locations in Los Angeles county. Jackson Corey, a 24-year-old graphic designer based in the Greater Los Angeles area, has been searching to get out of his two-bedroom property in Koreatown for several months now. Corey feels that a community like Leimert Park would be ideal for him, as he would be in a more-affordable living arrangement all the while staying within a reasonable distance of his workplace.

“Koreatown is a great place to live, don’t get me wrong, but even the cost of living here is getting so high for me,” Corey said. “When I moved into my place here [in Koreatown] just a couple of years ago, it was so much cheaper. I think real estate in the Los Angeles-area in general is just getting higher. Not sure where I’ll wind up long-term, but a place like Leimert would be kind of an ideal: low-cost, great proximity to my work.”

Another factor that is very rapidly changing the housing landscape for communities like Leimert Park is the extension of the Expo Line through Los Angeles. Set to officially open in 2019, the Metro’s Crenshaw Line is set to have a station in Leimert Park. This Expo Line will be able to take local riders from locations like Leimert Park to downtown to as far as Santa Monica.

“While something like the Expo Line hasn’t immediately created too big of a impact in property values in a place like Leimert Park to this point, trust me when I say it will very soon,” said Andy Chao, who is the head of acquisitions at SoLA Rentals, a company which has a realty presence in Leimert Park. “Something like the Expo Line will especially draw younger people, they could see the nearby Expo Line as an alternative to driving into downtown for their work … The Expo Line will be a big time asset for real estate in these suburban Los Angeles communities.”

Andy Chao, the head of acquisitions for SoLA Rentals, discusses the housing climate in Leimert Park.