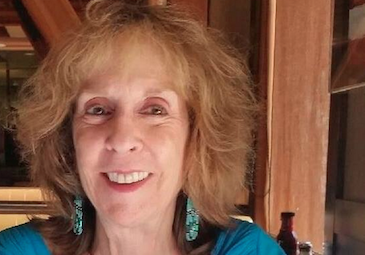 Jill Gurr is the founder of Create Now. She is very proud of her organization, and says Create Now has taken on its own personality and direction over the years. She feels like a proud mother of all the kids she serves. Photo courtesy of Facebook 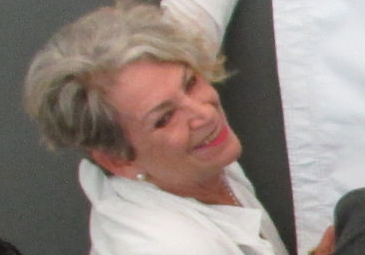 Laura Kelly is the director of programs at Create Now. She says her background in theater offered her very important collaborative and critical thinking skills. This is why she believes art programming is so important for youth. 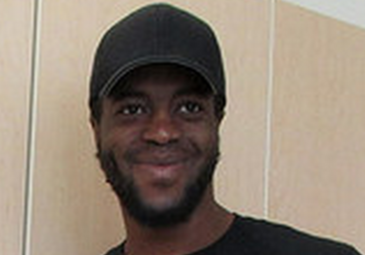 Brandon Johnson moved to Los Angeles from North Carolina a year ago to pursue a career in art. He works as a graphic designer at a media company, and has volunteered to lead two workshops at Create Now because of his love for kids and art. 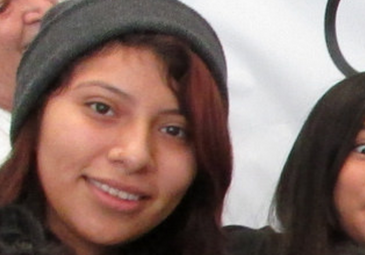 Melissa is a high school senior hoping to attend UCLA in the fall. She says Create Now has helped her discover talents she never knew she had, and appreciates that the program is offering kids an alternative to any negative influences they may have at home. 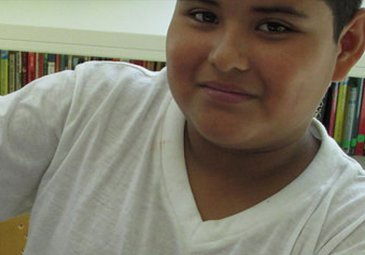 Carlos says art runs in his family. His dad is a spray paint artist, while Carlos prefers writing stories and drawing with pencil. But regardless of how much he enjoys art, he hopes to take another career path--he wants to teach English and history.

“I kind of created my own program from scratch,” said Laura Kelly, director of programs at Create Now, a nonprofit organization near downtown Los Angeles that works with troubled youth through art education and programming. “Parents asked for the program—the Mexican dance with the big skirts and mariachi music. So I put it together.” 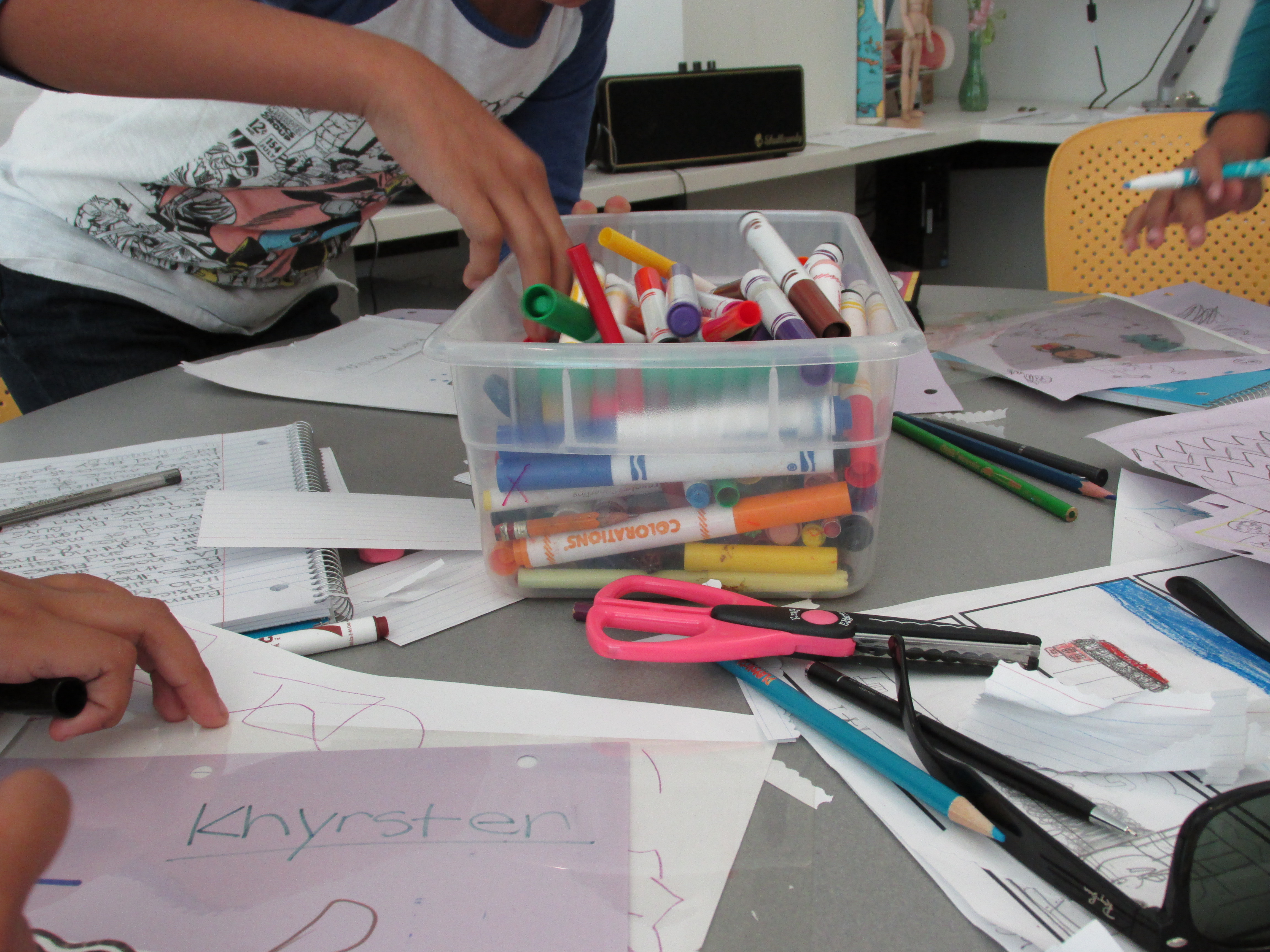 Create Now students reach for markers while at a workshop

Kelly submitted several proposals to the school district, which ultimately selected the dance program to include in one school’s curriculum.

Kelly hopes the dance lessons will result in more than just increased coordination for the kids. She believes they will improve students’ knowledge of history as well as their mathematics and literacy skills. She also hopes its effects will resonate outside school walls.

“It could bring some work into the community—maybe some parents can help sew the costumes,” she said.

This is the kind of drive and creativity that Create Now directors possess—and this kind of broad impact is exactly what they hope to accomplish with every art workshop and program they design for Create Now, from one-day classes to workshops lasting months or even years.

The organization’s mission, according to founder Jill Gurr, is to “give youth the opportunity to find their voices through the arts.”

Beyond that, “our idea here is to build self-esteem. That’s one thing that’s so important for some of our kids,” said Kelly. “There’s certainly a therapeutic component to the arts, and culturally, it’s of immense value.”

Schools do not always provide kids with this opportunity that Gurr and Kelly believe is so important.

“It always seems anecdotal that arts improve academics, but while most art has been cut out of budgets, people are coming around again,” said Kelly. 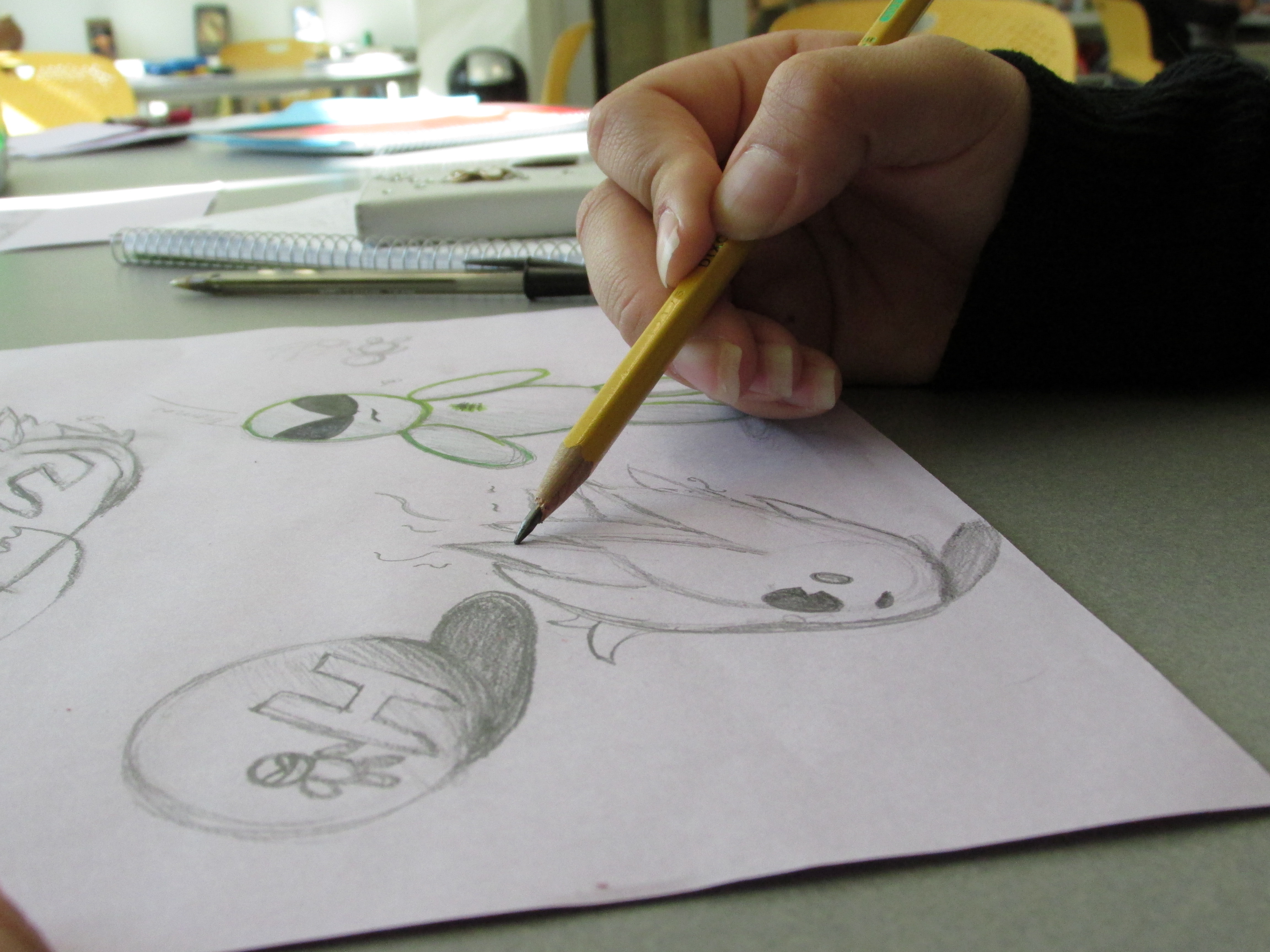 Create Now will soon bring programming to local Aspire charter schools. Aspire came to Create Now seeking art education for their students. The schools have 100 percent graduation and college placement rates, but, Kelly said, “they don’t think they’re creating the whole person.” The students are skilled in math and writing, but the schools want to bring art to the kids, Kelly said, “for no other reason than to create more enriched students. I love that philosophy.”

Kelly said there is more money coming to LAUSD for the arts, but it’s not much. Aspire is a great example, according to Kelly, of schools starting to see the importance of developing students into “more than just automatons who can graduate.”

While Create Now works throughout the local community, it focuses on troubled youth—kids who have been taken from their families, foster children, kids living in transitional homes for the homeless, kids on probation—kids who “have the world stacked against them,” according to Kelly.

Create Now’s programs allow kids to “express themselves in a positive manner versus the destructive ways they may have used in the past,” said Gurr.

Create Now works with about 100 agencies throughout Los Angeles. Kelly explained that working with these agencies is a difficult process because there are so many variables with these populations. “Sometimes kids can’t make it to a program because, for example, there will be home visits that weekend.”

Regardless of the difficulty, Kelly stressed the importance of providing art programming to these populations. “The kids go to school during the day, and after-school activities are really important, as are weekend activities. We’re always trying to do more programming.”

Melissa, a high school senior hoping to attend UCLA in the fall, has been participating in Create Now’s new graphic design workshop since it began last month. She agrees that this programming can be life changing.

“Our generation of kids is at risk of going the wrong way. But this is a place where they can come and be educated, and they won’t be around the bad influences they have during the week. You never know what might be going on at their homes,” she said. 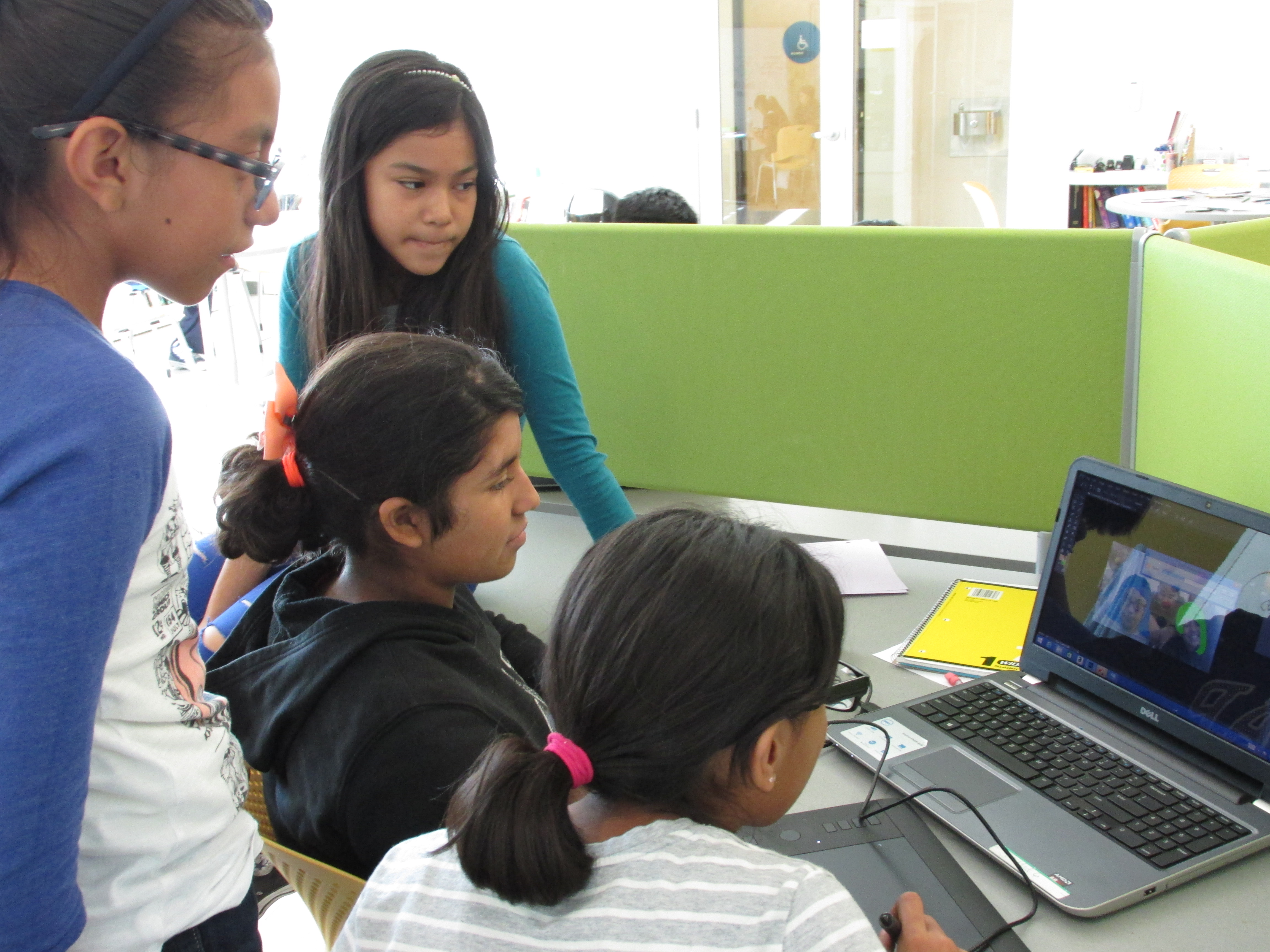 Create Now students gather around a computer during a workshop

Melissa is taking three AP classes in high school while also fostering her newfound artistic talents. “I’ve already started liking drawing. I never even knew I had that skill.”

Kelly recalls seeing the same inspiration in other students. “I remember somebody who said, ‘I’ll never learn the guitar’ at lesson one, or ‘I don’t want to cut my nails,’ ‘my thumb hurts,’ whatever, to, ‘I never thought I’d learn to play a song. I know four chords.’”

The kids who participate in Create Now art programs get more than just a chance to express themselves through art. They become part of a family at the organization.

“We had arts and crafts, snacks, all sorts of programming going on here, and these kids managed to make this movie,” said Kelly as she searched her computer files for a student-made short film.

“While all of that was going on, the writer and cinematographer and director all took off and the kids filmed this—the first movie that was ever made here,” she continued.

Kelly laughed as she recalled stumbling upon the newly impassioned filmmakers. “I just happened to go out into the hallway and somebody is throttling a mannequin, and I said, ‘what the heck is going on?’”

Kelly located the video and prefaced it: “Now, the soundtrack—that was all recorded live as they filmed. One of our board members is Pink’s drummer, and he was hosting a drum workshop while they were trying to film this.”

She pressed play, and a witty nail-biter about an international crime syndicate overtook our attention for five minutes.

“That’s the kind of stuff they can do on the fly here with our mentors. It was just insane,” Kelly concluded.

This is another short film made by Create Now students. Video link here.

She also recalled a recent mural project, where volunteer Brandon Johnson led 20 kids in planning and painting a mural for LA Family Housing in North Hollywood.

“They created this mural about home, of all things—these were homeless kids. We had a wonderful unveiling. The parents got to drop in, and we had gifts for all of them,” she explained. 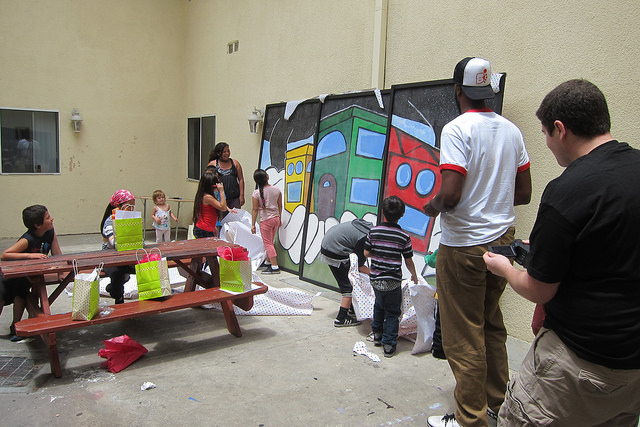 Johnson moved to Los Angeles about one year ago, and the mural project was the first project he led with Create Now. He hopes that his mentoring gives kids the kind of inspiration he needed while he was in school.

“There was no one there to tell me how easy it was or how hard it was to become an artist. So when I was in college, I studied art, but no one there could tell me what I could do with it after I graduated,” he said.

Johnson explained that people tried to influence him into making a career out of playing football, which he did while in college. He was also in ROTC. But he always wanted to be an artist, and had to make that happen for himself with little guidance. He now works in Los Angeles as a graphic designer.

“Like a leap of faith, I just went out there in the world and tried to explore the realm of art myself. It really wasn’t as hard as I thought it would be,” Johnson recalled.

He is currently leading his second workshop with Create Now, which is a graphic design workshop. “Of course I’ll keep coming back. I love Laura. Is that on record?” he laughed.

Johnson believes kids need someone to tell them how they can pursue art throughout their lives. “As long as there’s someone there who actually has experience, that’s what matters, and I am that for them.”

While some instructors are paid, Create Now largely relies on volunteers to lead workshops. “People always come to us, people who love to do volunteer work,” said Kelly.

A Create Now student works on drawings during a workshop

Create Now has been going strong since 1994. About how the organization has evolved over the years, Gurr said, “What started as an idea and an opportunity to make a difference in the lives of troubled kids has touched people all over the world.” She reflected on her own relationship with the kids in the program. “When I see a child’s face light up as they share their creations, knowing how this builds their confidence and self-esteem, it makes me feel like a proud mother.”

As for the future, Johnson has a suggestion: “We need more young people working for us who kids can actually communicate with. We need more people that really understand kids.”

But for now, said Johnson, “We’re doing okay—and for me and for the kids, it’s pretty fun.”