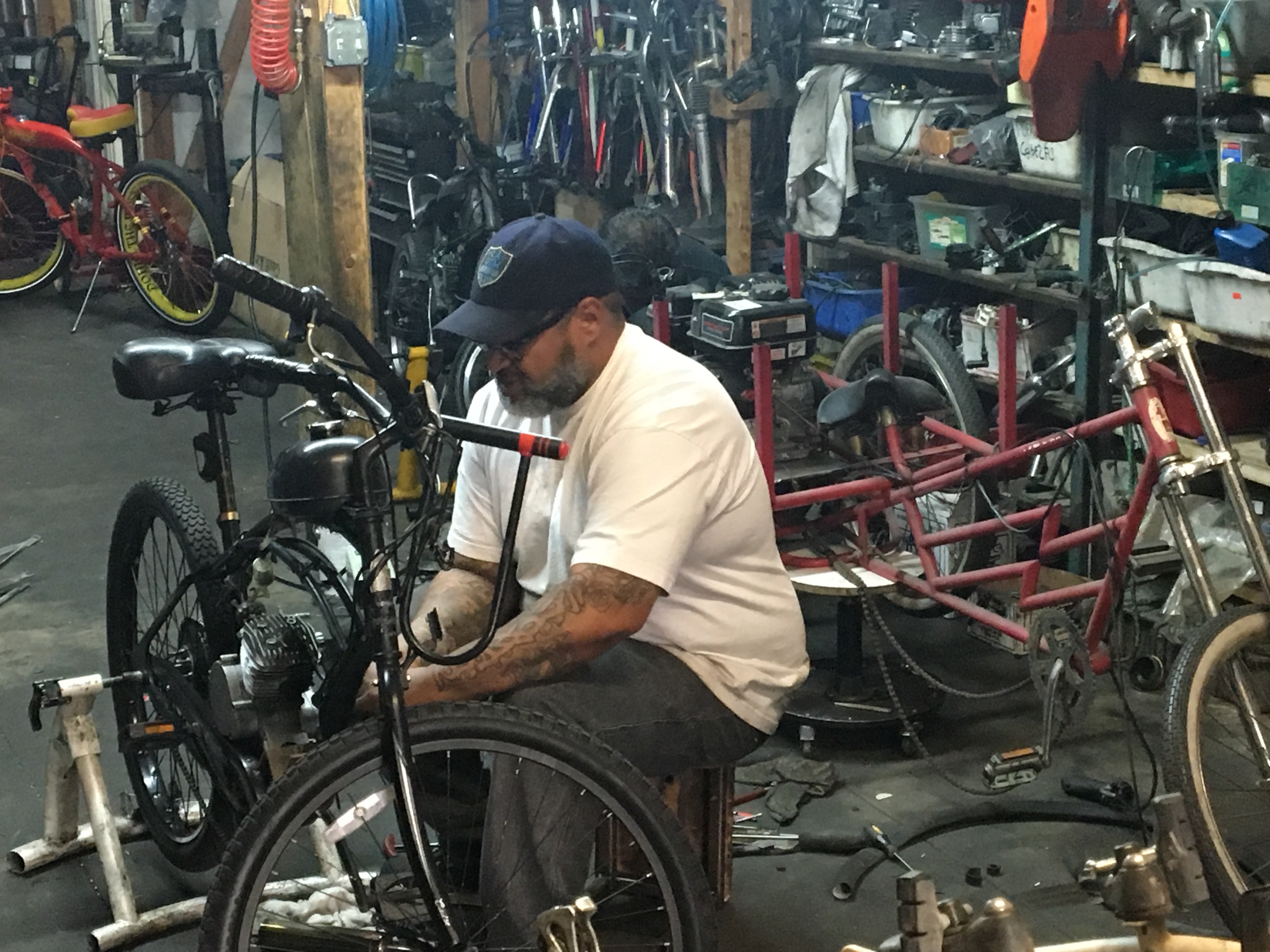 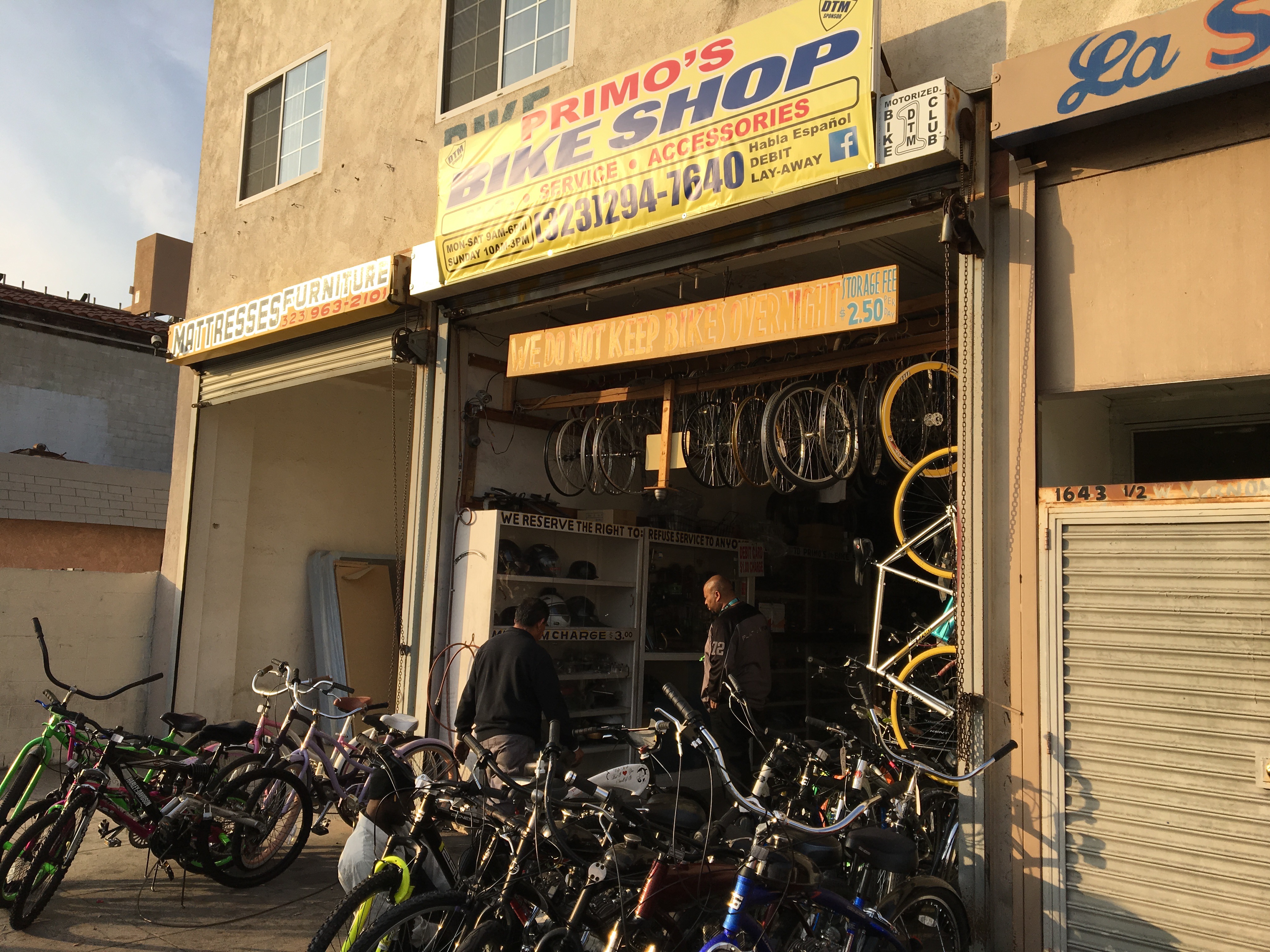 Located on Vernon Ave. and Western Ave., Primo's works actively in the community to promote biking. 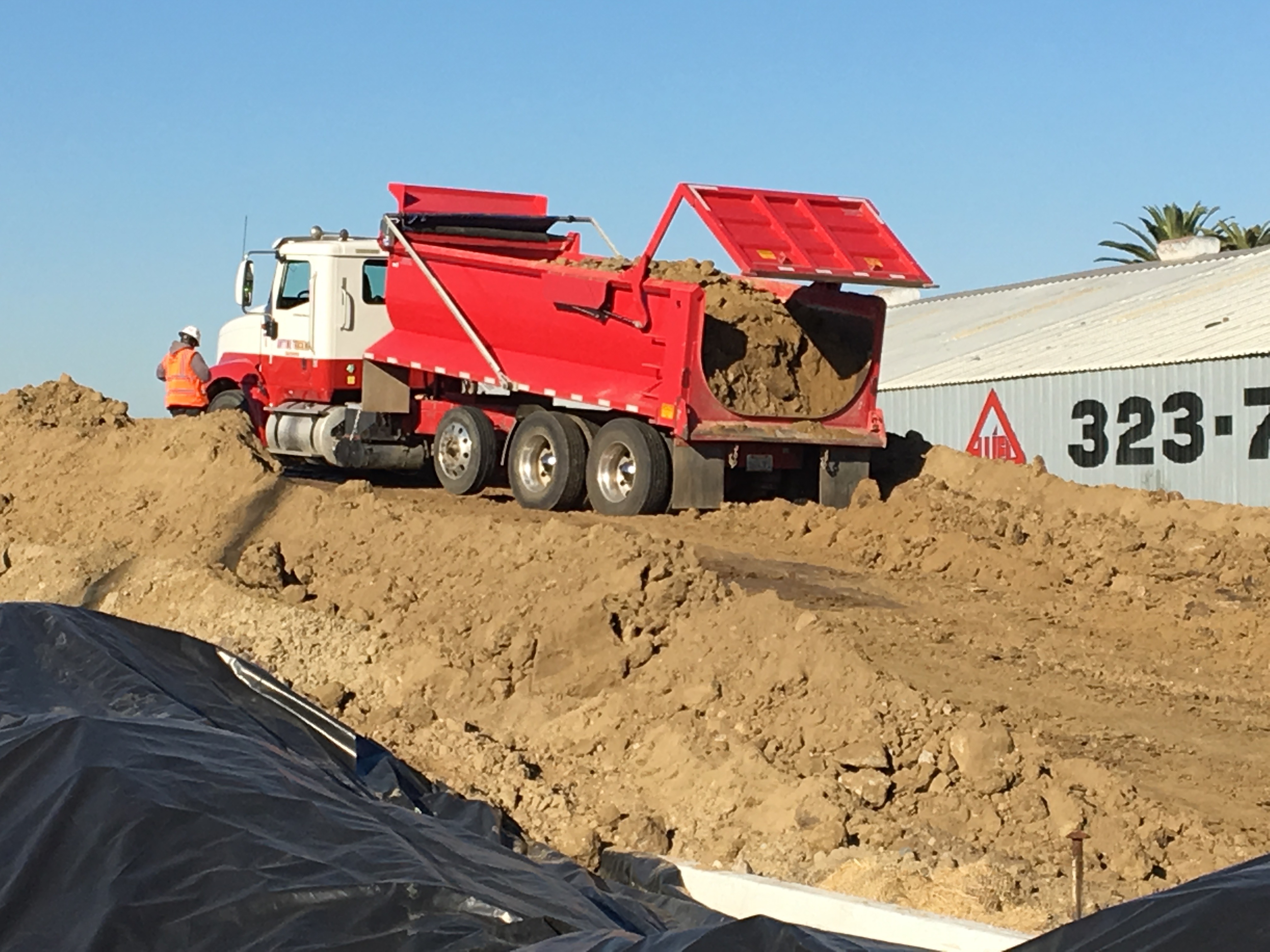 A dump truck piles dirt along the now closed right of way. 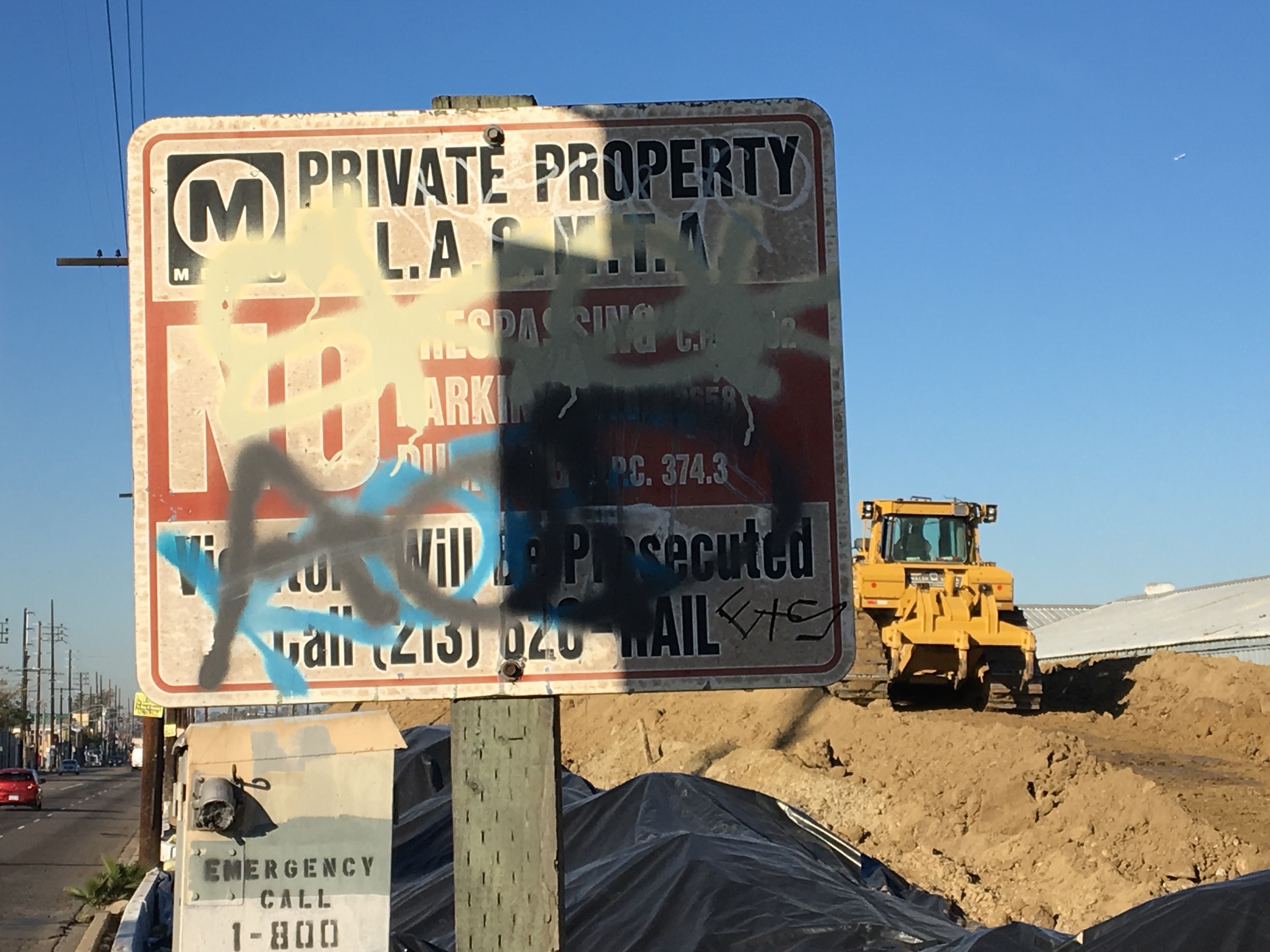 Metro purchased the property and has been developing plans to build a bike path.

Currently, there is no sidewalk along the north side of Slauson Avenue. 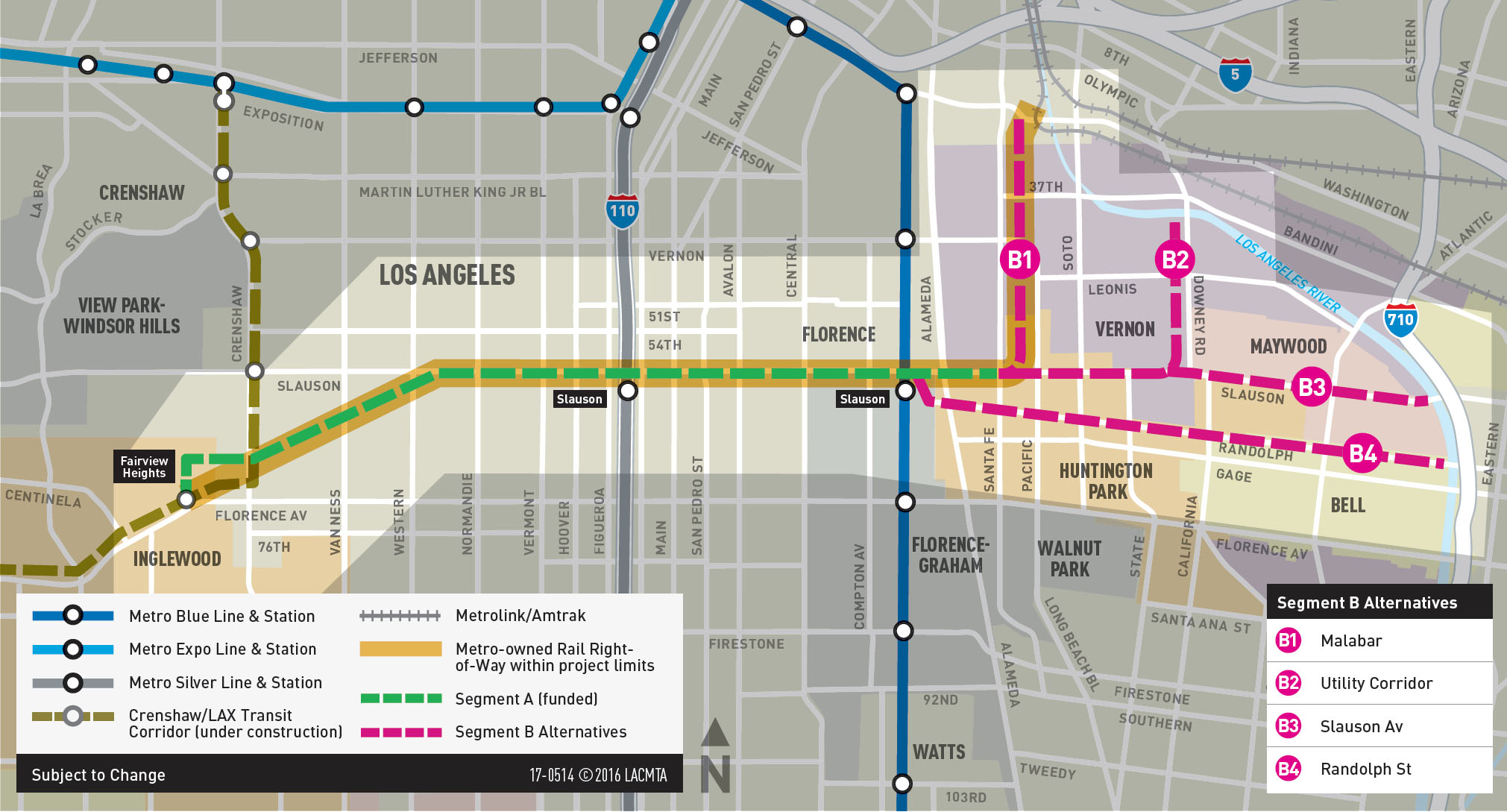 Vermont Square is home to one of the most transit dependent communities in Los Angeles County, with a lack of mass and active transportation routes. The South Los Angeles Community lies along a blighted and abandoned railroad which is not only an eyesore, but a safety concern.

In order to rejuvenate the corridor, the Los Angeles County Metropolitan Transportation Authority, known as Metro, has proposed the Rail to River Active Transportation Corridor project, in order to bring a safe pedestrian and bicycle path to South LA, where it is much needed. Community members hope this is a step in the right direction towards making South LA a safe, economically viable region.

Along Slauson Avenue, the Harbor Subdivision right of way stretches from Downtown Los Angeles, and circles around the South Bay until it reaches the Port of Los Angeles. A portion of the right of way is already under construction as part of the Crenshaw/LAX Metro Rail line. South of LAX, the right of way is still functioning as an active freight railroad. However, between Inglewood and Bell, the Harbor Division is prime land to be developed into a 21st century mode of transportation

According to Rail to River project manager Robert Machuca, active transportation is any form of transit that does not require a motor. This active transportation project is a first for the agency, and they hope the community will embrace it with open arms. The project has been in talks since 2006, but headway wasn’t made until Metro Board member and LA County Supervisor Mark Ridley-Thomas officially proposed a plan in 2012. Segment A is proposed to open in 2019.

Machuca says the project is divided into two segments, A and B respectively. The first of which traverses Slauson Avenue from Santa Fe until it intersects the Crenshaw/LAX Metro Rail Line. This 4.5-mile segment crosses through some of the most transit dependent regions in the county. Segment B runs east from Santa Fe Avenue to the Los Angeles River, giving the project its namesake.

According to Metro, 18.4 percent of households along the corridor do not own a vehicle. Currently, there are not many alternate forms of transportation available in Vermont Square. There are several bus lines that run through the area, and the Crenshaw/LAX line will open in 2019, but there are very few places where cyclists can safely traverse city streets. According to Machuca, the price tag has been lessened after a grant from Caltrans for 8.3 million dollars as well as a TIGER grant worth 15 million dollars.

Cycling was not always as common as it is now in South Los Angeles. Primo’s Bike Shop in Vermont Square has seen a significant increase in customers over the past four years. The owner, who goes by Primo, has not seen any improvement to go along with the changing bike culture of South Los Angeles.

Snowman, whose real name is Ronny White, believes that the bike path is crucial to the development of South LA. Snowman works alongside Primo and the bike shop, and is an outspoken community member who advocates for cycling.

Primo agrees that bike safety has been neglected. “I was hit by an LAPD officer a few years back,” Primo said. “I was ok, and he paid for my bike, but it never should have happened.”

Take a look at Slauson Avenue, from Santa Fe on the east to Crenshaw on the west. If you follow the dark line, you will see the former Harbor Subdivision. Trace the line as it runs southwest towards LAX, then veering southeast as it runs through the South Bay to reach the Port of LA.

The proposed project would add to the 58 miles of dedicated bike paths in LA County. The Slauson Avenue corridor is one of the most dangerous for cyclists. In a Metro project feasibility study, it was found that there 684 pedestrian and 360 cycling incidents over an eight-year span. Karly Katona from the office of Mark Ridley-Thomas believes that is too much.

“There is a high rate of fatalities, and this bike path has the chance to make it safer.”

Katona is not the only one who believes that this project has the potential to be transformative. Planning and Policy Director Bryan Moller of the LA County Bicycle Coalition thinks that this could be the change South LA needs. “From a mobility standpoint, it allows people to get in touch with their community.” Moller believes that certain aspects of the project will help make the community safer as a side effect.

Here is a GoPro tour of the planned route. Video link here

Moller says that the project will create space for the community to gather, and with elements such as benches, lights and landscaping, it will create high walking and biking rates. This in turn will lead to what Moller’s goal of “more people on the street means more eyes on the street.” From a planning perspective this park space will serve as its own neighborhood watch, with a goal of lowering crime.

Common sense led some community members such as Kevin Taylor to ask why the abandoned railroad wasn’t being restored to it’s former state. When he asked Metro at a community meeting in August, he was told the price tag to make the project light rail would be too high to complete in the near future. However, according to Machuca, the project is being built to be able to accommodate an upgrade to light rail based on the success of the active transportation project.

Snowman is happy to see the bike path being built first, because it gives the community a chance to lower crime while also getting healthier. “Having a bike path is great for the kids. They get to play and get where they’re going.” 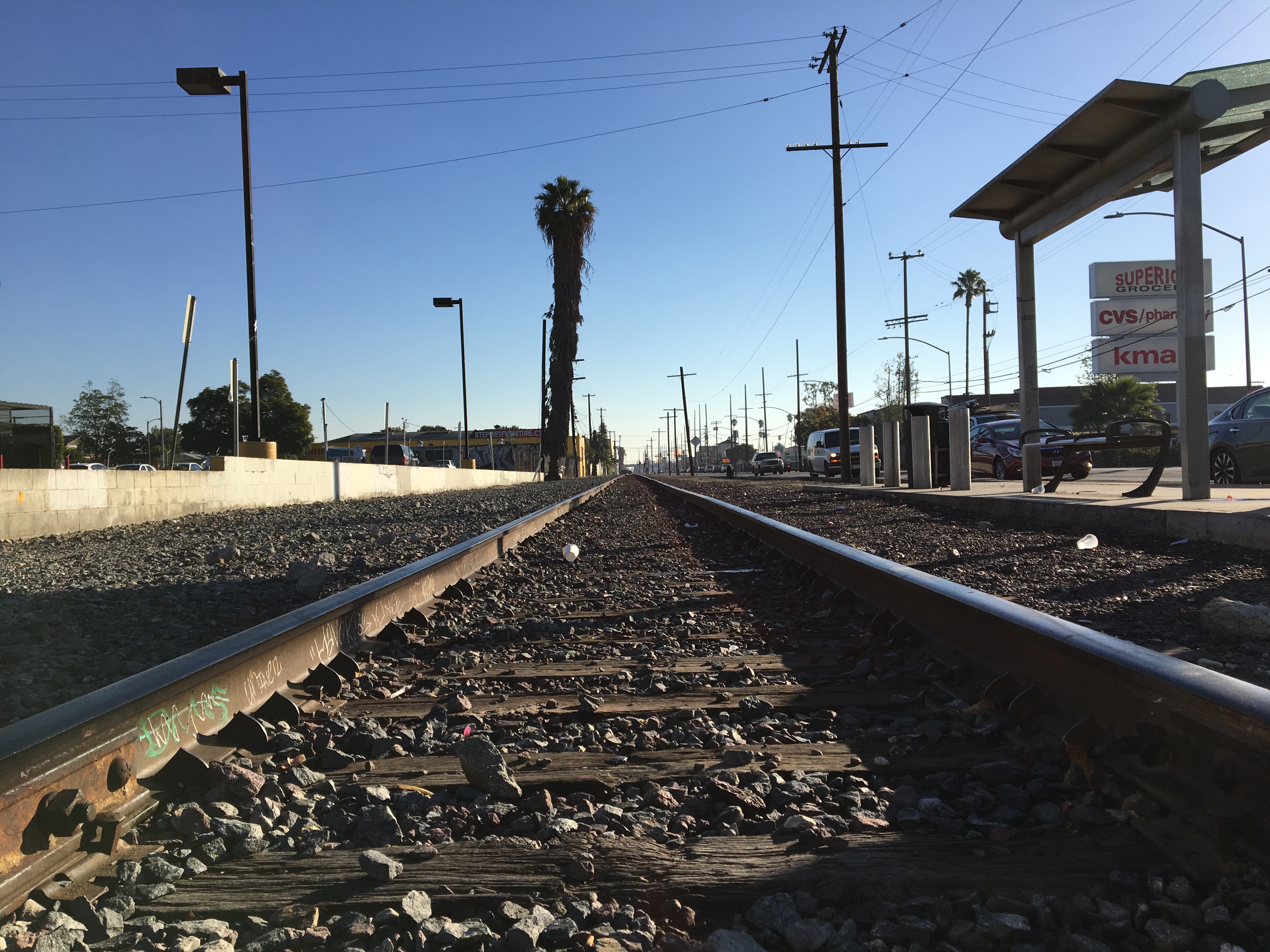