It’s clear that Los Angeles has been growing for the past few years. With the continuous rise of office buildings, shopping centers, and dining facilities, a new wave of residents have entered the downtown area.

However, behind the appealing nature of the location, this spike in demand to live downtown has created immense competition among apartment rental companies. In response to this, developers have begun to build larger and more luxurious apartments, which in doing so has begun to raise rental prices.

This overall transformation has created a major shift of living cost, causing a number of former residents to move outside of downtown.

This is exactly what happened to Ashley Weiler, who moved from the downtown area to Los Feliz, and currently resides in Korea Town.

Weiler came out to Los Angeles from Michigan to pursue a career in fashion. Attending school at the Fashion Institute of Design and Merchandise (FIDM), Weiler quickly became aware of high rental prices in Los Angeles.

“I had a 400 square foot apartment and it was $1100 per month. There weren’t many other options around me that were close to school with as many amenities, so I almost didn’t have a choice,” Weiler said.

Weiler added that her first apartment in downtown was worth the same price as half of her current apartment size. Her apartment now includes a kitchen, full living room, and she lives with two other roommates instead of one in one bedroom.

Weiler’s current apartment doesn’t have any amenities besides water and trash pickup, and there isn’t as tight of security around the area, according to Weiler.

“Although I’m not living in a massive complex with a bunch of crazy amenities, that’s ok because it’s not really my style anyway. I’d say if you’re really going to take advantage of that, then maybe a luxury apartment is right for you if you can afford it,” Weiler said.

One complex in particular is described as just that. The newly developed building Eighth & Grand takes pride in its distinct qualities of luxury living in a popular location.

Residents living here can take full advantage of private concierge service and poolside cabana reservation, workout in a private 5,400 square foot gym, receive delivery service from Bottega Louis, and a number of other personal amenities, according to the Eighth and Grand website.

Estela Arevalo, Sr. Leasing Professional of Eighth & Grand, believes that the spike in apartment complexes going up in Downtown forces developers to get creative with potential services and living styles.

“Downtown is becoming a little bit like New York. It’s an upcoming little city and 'foodie' central. I think other communities have to create new ideas to stand out,” Arevalo said.

In fact, Eighth and & Grand is one of the more than 90 new apartment complexes in downtown that has to fight its way to the top.

Uracha Chaiyapinunt moved downtown in early August of this year, and she agrees that paying $1000 a month is expensive, but understands the reasoning behind this.

“The apartment is in a very convenient location. There are grocery stores, restaurants, bars and a movie theater in walking distance. When looking at where to live downtown, I found that all the apartments in this area for the most part were high-end and expensive,” Chaiyapinunt said.

“That's the kind of clientele developers want to attract - young professionals or older adults who can afford the neighborhood,” she explained.

Both Weiler and Chaiyapinunt are excited for downtown’s upcoming development, and believe that in order to improve the overall area of downtown, gentrification and higher rental prices are expected regardless of the negative impact it can have on those paying for higher living costs.

“As much as I would love to move back downtown, I know at this point in time it’s not the most financially smart decision as a 21 year-old. I will definitely move back when I have more of an established career and don’t need financial support from my parents,” Weiler said.

Samuel Sunito is another resident of the downtown area, living right near Eighth & Grand. He purchased his apartment, a 2 bedroom and 2 bathroom loft, which has a rental price worth of roughly $4000 per month.

Sunito picked this apartment due to its close proximity to stores, tight security, safe environment around the complex, and other luxury amenities. Although the price was on the higher end, he felt like it was a great long-term investment.

“It's a pro that the increase in supply of apartments is being met by newer stores and better amenities around downtown, because this increases the demand to live in this area. That also raises the price of my apartment. ” Sunito said.

“If I resold it after 6 months I could make $50 to $70k minimum. That's just based on the comparable resell value of apartments around my area that are the same quality,” Sunito added.

“I definitely have friends who aren’t happy about the rental prices in downtown, and I’m not saying that it’s the best thing ever,” Weiler said.

“However, downtown has been really trying to become a more ‘livable’ place and attract more people of higher socio-economic status. That being said, I think this will have an overall positive impact on downtown and Los Angeles’ economy as a whole,” Weiler added. 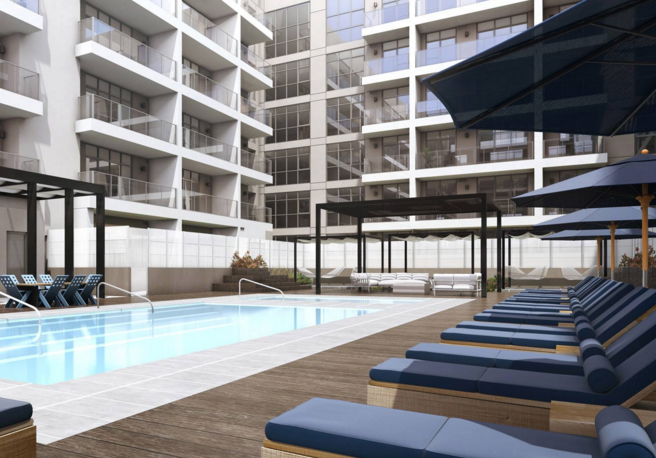 This is a 700-unit apartment complex with floor-to-ceiling windows and balconies. There is also a top floor lounge with a bar and dining area, two pools, landscaped terraces with outdoor eating areas, and a theater-style screening room. Below the complex is a four-level underground parking structure.

This 26-story apartment structure at Ninth and Hill streets has 305 luxury apartments with 7,000 square feet of ground-floor retail space. The building is made from modern glass tower with balconies atop a 333-space parking podium. There are 350 bicycle parking spots outside of the complex. Amenities include a 12,300-square-foot outdoor deck, a pool, an indoor gym, a yoga studio and a lounge with a full-size kitchen. The top floor would be a lounge area with conference rooms. The developer expects to break ground next spring and complete the building in 2018.

This is a $76 million renovation of the Bunker Hill Towers. All 456 rental units in the 1969 complex will be upgraded. This includes new HVAC (heating/ventilating/air conditioning) systems and new plumbing lines so that each apartment can have its own washer and dryer. All the windows will be replaced with more energy-efficient panes and there will be full-size balconies on corner units and smaller balconies with sliding glass doors on center apartments. This will also include an 11,000-square-foot, two-story amenity center with street-level retail, a large gym on the second floor and a rooftop pool and sundeck. All the work is expected to finish by late 2017.

This seven-story building on the Southwest corner of Olympic Boulevard and Olive Street will include 12 two-story town homes, a third-floor pool deck, a dog run and a large fitness center. There are 228 parking stalls, as well as 4,100 square feet of ground-floor retail and commercial space. Developers expect to complete the project by summer 2016.

This renovation of a small seven-story 1913 edifice at 950 S. Broadway will turn into 30 apartments including a rooftop deck and about 7,500 square feet of retail space on the street and basement levels. Developers are focusing on the restoration of the original aesthetic. The 102-year-old building sits next to Palmer’s under-construction Broadway Palace, which will create nearly 700 apartments in new seven- and 10-story structures at Olympic Boulevard and Broadway. It's expected to be completed by May 2016. 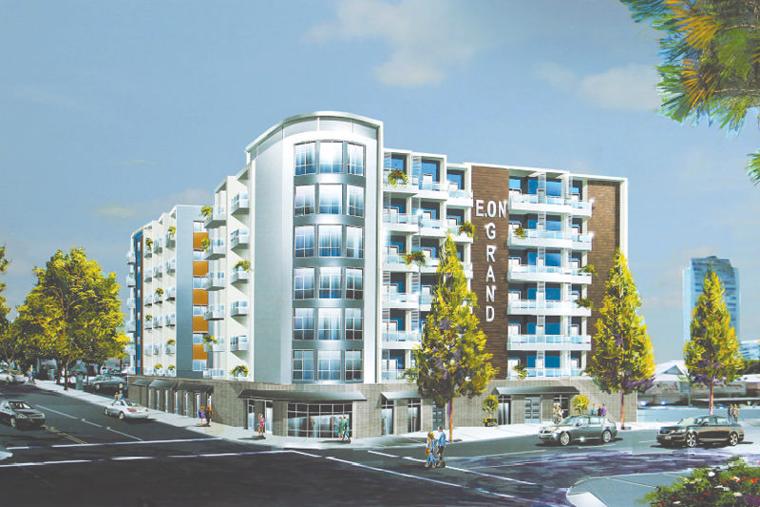 This is a 7 story apartment building E. On Grand, at 1249 S. Grand Ave. The $30 million, 115-unit project will have studios and one- and two-bedroom units averaging about 600 square feet, with rents of approximately $3.50 per square foot. Amenities will include a pool, sun deck, recreation room and gym. The ground floor will hold about 5,000 square feet of retail/commercial space and the building will contain 120 parking spaces. The project is expected to be complete in October 2016.

You can see the floor plan here 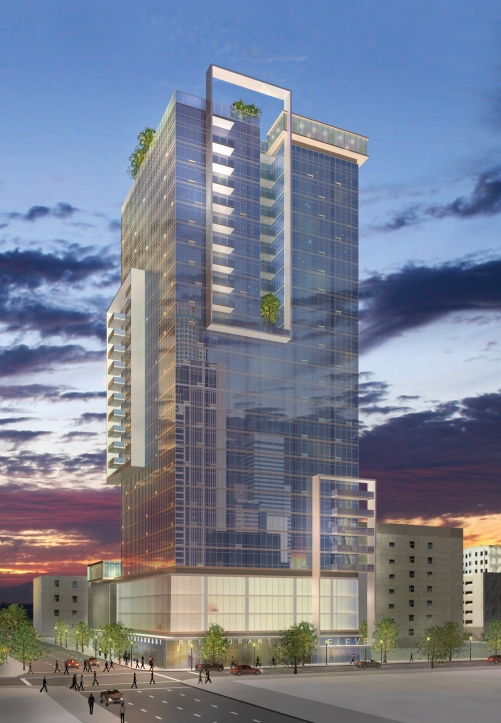 This 33-story residential tower will have 363 units: studios, one- and two-bedroom apartments and eight penthouses. Amenities include a fitness center, a rooftop pool and lounge, a larger pool and recreation area on a fifth-floor deck, and 10,000 square feet of street-facing retail. The project is expected to wrap construction in the third quarter of 2017. 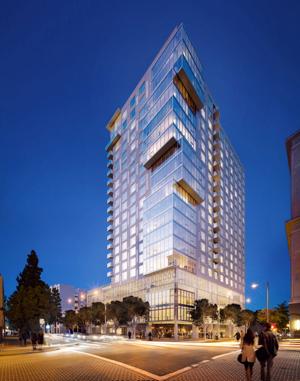 The 25-story tower at 1050 S. Grand Ave is a $100 million project, containing 151 luxury condominiums, most with one or two bedrooms. There are also several one- and two-floor penthouses. Amenities will include a fifth-floor pool deck with cabanas, a fitness center, entertainment areas and small pockets of green space. Ten50 also includes 5,672 square feet of retail space, with storefronts along Grand Avenue and 11th Street. 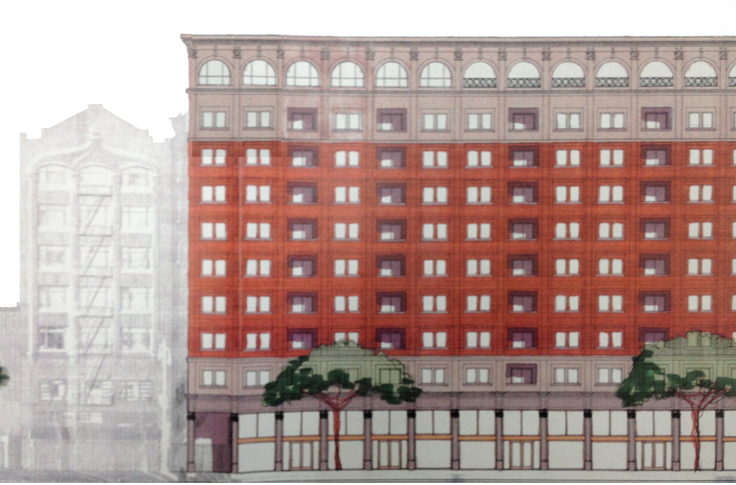 The 15-story condominium complex at 955 S. Broadway will be a 184,705-square-foot structure near the Ace Hotel remains in the environmental review stage. Plans call for the 163 housing units to run from 665-1,465 square feet. There would also be eight commercial spaces, an outdoor area on the second floor and a rooftop deck with a pool, barbecue and garden.

The Seven-story, 274-unit complex at Grand Avenue and Olympic Boulevard is expected to have studio to two-bedroom apartments, many with glass balconies. Amenties include access to rooftop decks and a pool, and there will be 12,000 square feet of street-level retail space. The project is expected to be finished by early 2016.