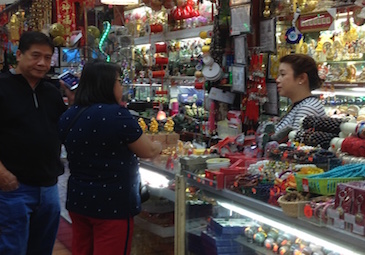 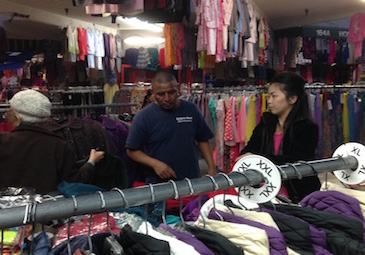 The female Asian owner of this clothing stand inside the Saigon Market argues with this Hispanic man in both Spanish and English over the price of a sweater. 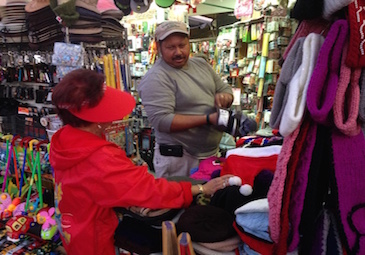 This short, Asian woman owner of a stand at the entrace to the Saigon Market attempts to have this man buy her hat by haggling the price. 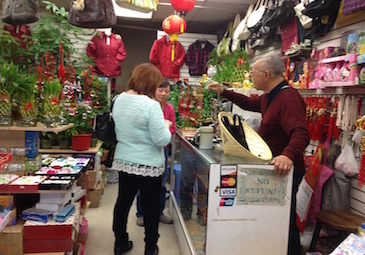 This Asian couple, who own U&T Gifts on North Broadway Street, talk to this Caucasian woman about different pieces of jewelry

Inside of the glorified cubical with white walls barren of symbols and glistening tile floors that look like the buffer just came through sits a middle-aged man leaning back on a metal folding chair behind a display case with his arms resting behind his head.

Behind the show room no larger than a college dorm room is an office space the size of a janitor’s closet finished with a desk crammed against the wall.

On the counter sit dozens of lottery tickets, seemingly separated by game, but truly separated based on the people who buy them.

“I usually know what people want when they walk in,” said Phu, the owner of The Alpine Store in a side alley off of the bustling North Broadway Street. “Hispanics like these, the Lotería, because they have pictures and some of them can’t read so they just look at pictures. Whites, they like the crosswords because they can write and spell things out. Asians, they like scratch offs.”

As a business owner in Los Angeles’ Chinatown, Phu, 47, encounters customers from a large variety of racial backgrounds daily.

More than 70 percent of residents in the community are foreign-born, including 55.3 percent from China and 12.4 percent from Mexico, according to the Los Angeles Times.

Phu, who came to the United States with his mother when he was 10 from Sam Son, a city in north-eastern Vietnam as a refugee, has lived in Chinatown for 25 years and embraces having so many cultures in one area, though he acknowledges he is still more comfortable around people from his home country.

“People come from almost all over. I’d say 50 to 60 percent are from Vietnam and it’s great having such a diverse area,” Phu said, now learning forward and resting on his knees. “It’s not difficult to interact with different people from different areas, but if they’re from Vietnam and they speak my language then it’s even better.”

Steve, 65, who requested his last name not be used, immigrated to America from Hong Kong, China 45 years ago and is now the owner of Joy Smoke Shop.

During his 10 years of owning stores in the area, Steve has encountered similar situations when dealing with the vast backgrounds of his clientele.

“Chinatown has a lot of problems, many with the businesses, but it’s not difficult to work with the people,” Steve said in the midst of a rant about the sales of his pipes and bongs dipping in the earlier years. “Obviously there are different groups of people and the people from Hong Kong are the easiest to work with because I know them the best, but everyone is pretty good.”

While Asian backgrounds make up most of Chinatown's population at 65 percent, owners of other ethnicities have not had trouble dealing with the cultural changes either.

Kobe, 15, moved to East LA from Guatemala as a young child with his parents and two older brothers.

For the past three years, since he was in seventh grade, Kobe and his brothers have traveled up the coast to Bakersfield, California to fill their rusted white Chevrolet pick up truck with fresh produce to sell on the side of the road.

Every weekend the trio sets up shop outside the Broadway Jewelry Mart, enticing passersby, many who speak neither English or Spanish, to buy their fruit for $1 a pound.

While Kobe does not speak any of the Asian languages, his oldest brother has learned enough to get simple ideas across, and they have never had any trouble with their customers.

“People just come and buy and then the police come and they say you have to move so we just go other places to sell. We have to get money to pay rent,” Kobe said with an orange in hand. “We get along with them, we talk with them, we don’t become enemies or anything.”

Not only do Kobe and his brothers get along with their oriental customers, but they interact well with others that come to their spot to also sell goods.

“There’s a lot of different people that come by and go ‘can we sell here?’ so we say sure, go ahead. It’s a free state,” Kobe said as a short woman sitting on a crate with a spread of peaches and nuts in front of her lurks behind him. “It’s not private property so we just let them work.”

Although Chinatown is a congregation of people from around the globe, the relationships that they have forged in this new community is what continues to allow it to thrive.

Regardless of race, ethnicity or cultural backgrounds, this melting pot serves as a catalyst for the intermingling of different ideas and beliefs through simple interactions walking down the street or the communication between a small business owner and their customer.

So while purchasing a small ticket could seem like any ordinary transaction, that scratch off lottery ticket means a lot more.