One year ago, Albert Pan took over operation of a small plush-toy wholesaler from his aunt. Business has not been great for years, but he hopes to find a way to turn that around.

Along with his wife and brother, Todd Mumford opened one of Los Angeles' newest craft breweries this summer. Located in between Little Tokyo and Skid Row, Mumford Brewing represents a new wave of businesses that could transform the area into a popular destination.

While many of the toy wholesalers that were around during the heyday of the Toy District are now gone, Casamanga has found a way to carve out its own niche. Owner James Lee says that while business is difficult, he believes he has the tools to succeed.

The history of downtown Los Angeles is one filled with highs and lows, and nowhere is that more apparent than in the small businesses of the adjoining communities of Little Tokyo and the Toy District.

Today, Little Tokyo enjoys an influx of new development. It’s becoming a trendy destination for young Angelenos looking for anything from a piping-hot bowl of tonkotsu ramen to the latest in streetwear and alternative fashion. But decades before Little Tokyo’s recent revitalization, some of the area’s oldest small businesses were busy laying the foundations in a community of proud Japanese immigrants.

In 1903, two of the neighborhood’s oldest small businesses had their beginnings: the Fugetsu-Do confectionery and Japanese-language newspaper The Rafu Shimpo. Their longevity is a testament to just how intertwined these two businesses have been with the history of Little Tokyo.

“This business and the pastries we make are so tightly connected with a culture and a community, and I think that’s a part of why we’ve been around so long,” said Fugetsu-Do owner Brian Kito, one of the neighborhood’s most prominent figures.

The Rafu Shimpo has been in current publisher Michael Komai’s family since 1922, when his grandfather H.T. Komai took over operation. Although as with any print publication, advertising revenue and circulation are down for The Rafu Shimpo, Komai said the newspaper – which now publishes both Japanese- and English-language sections – still serves an important purpose.

“I view my job as a resource,” Komai said. “The newspaper acts as a filter. As a niche newspaper, we are able to find those stories that resonate and put them out there. The fact that we have that niche type allows us to provide that focal point.”

With the decline of the print industry, The Rafu Shimpo has had to adapt for the digital age. But Komai said that the newspaper’s goal is not a complete transition to the Internet. Instead, its online version is meant to supplement and allow the print publication to continue circulation. Komai said that a large portion of The Rafu Shimpo’s readership is among the elderly Japanese-American demographic, and the continuation of a physical newspaper is important for them.

Both Fugetsu-Do and The Rafu Shimpo were shuttered during World War II, as their owners were among the more than 110,000 Japanese Americans sent to internment camps after the bombing of Pearl Harbor. During that time, the demographics of Little Tokyo changed rapidly, but after the war Japanese Americans were determined to return to the community that they called home.

By the end of 1946, both businesses were operational once again, and soon several other Japanese-American family-owned businesses began to sprout up.

Today’s Little Tokyo is going through another demographic shift, as some newer small businesses in the neighborhood are straying from the traditional Japanese-American style of the older businesses. Bars like Far Bar, Wolf and Crane, and Mumford Brewing cater to the younger generation that once again sees Downtown Los Angeles as a nightlife and entertainment destination.

On one hand, said Rafu Shimpo publisher Michael Komai, that shift has brought larger crowds to Little Tokyo who are willing to spend money at local businesses.

“Twenty-three to 25 years ago, Little Tokyo was not a place you would walk around at night,” Komai said. “Now you look at Second Street and it’s packed with people.”

But on the other hand, he said, the neighborhood is at a crossroads for maintaining its identity.

“I think the community is losing some of the old mom-and-pop, quaint feeling,” Komai said. “If the new business owners are able to retain some of that feeling, that would be great.” 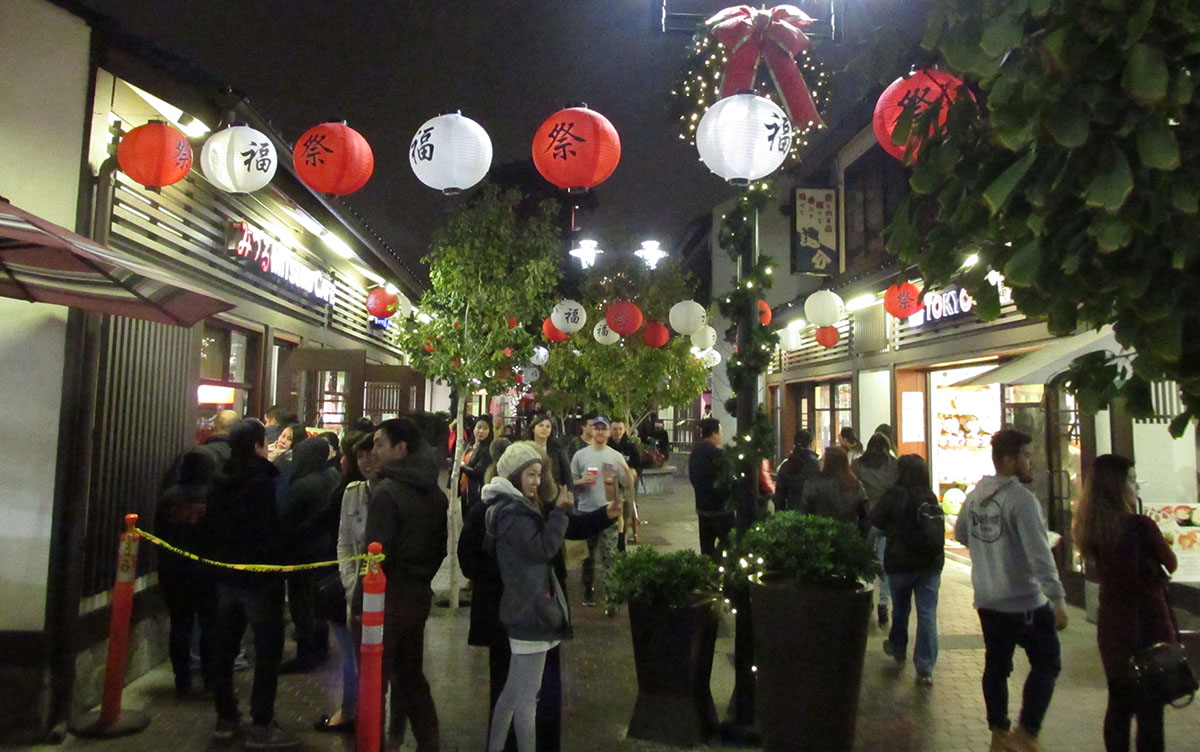 Just past Little Tokyo’s southern border of East Third Street, the outlook looks much different for the businesses of the Toy District.

The industrial district earned its moniker in the 1980s when it transformed from a derelict wasteland with rock-bottom property values and high vacancy rates into a central hub for the distribution of billions of dollars in toys being shipped to the Ports of Los Angeles and Long Beach from Asian manufacturers.

Today, however, many of those toy wholesalers – including the largest, the multimillion-dollar Megatoys – have either closed or moved out of the district. The few that are left, like Cal Toys on East Fourth Street, are much smaller and often struggle to maintain steady business.

“Maybe the big companies do some good income, but for the small business, it sucks right now,” said Cal Toys owner Albert Pan, who took over operation of the 22-year-old store from his aunt one year ago. “It’s not as much as we imagined. I hope later on we’ll be good, but who knows.”

Multiple business owners in the Toy District said the area was trending downward even before the economic crisis of 2008 but was hit hard by the recession and has been especially slow to recover.

Possibly exacerbating the problem is the fact that in 2009, Toy District property owners voted down the renewal of the area’s business improvement district, or BID. According to the Los Angeles Times, they were reluctant to pony up the cash with falling rents in the area.

In the City of Los Angeles, BIDs collect a special assessment from all members within the district’s boundaries and use the money to provide services such as trash pickup, organize programs and activities to strengthen the local economy, and represent the business community in city government. The Little Tokyo BID, for example, pays for security ambassadors and helped to organize a recent weekend-long holiday shopping event. 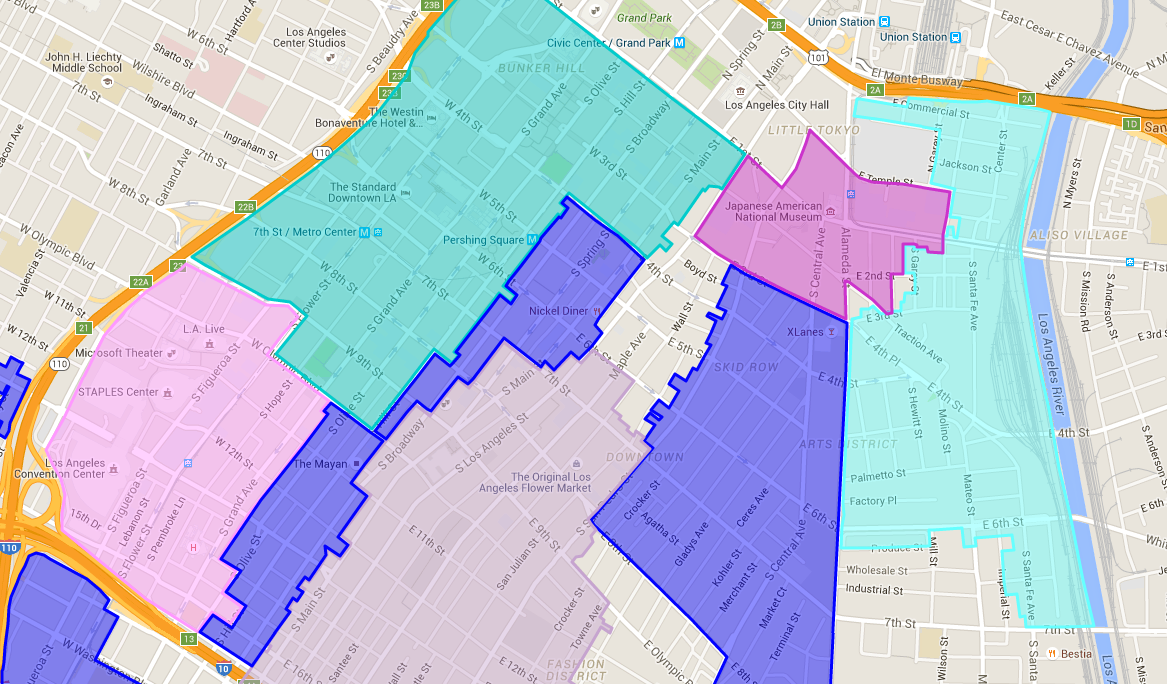 The Toy District, meanwhile, has no additional security presence. Trash sometimes piles up on the streets and in the gutters, and vastly fewer people are seen browsing the shops than in Little Tokyo.

Josh Kim, owner of Super Anime on Wall Street, said that the rise of online retailers like Amazon have hurt the small wholesalers of the Toy District, especially as other retailers try to mimic that strategy.

“Stores like Target and Wal-Mart saw their sales going down, so they tried to do what Amazon did,” Kim said. “With the economy, people are always trying to find deals, and we just can’t compete with those kinds of prices.”

But much like the mom-and-pop stores of Little Tokyo, Kim said he can still find business by focusing on a niche where he can fulfill a demand. For Super Anime, that means selling to smaller retailers and stocking up on branded items such as characters from Japanese anime or popular movies like Star Wars.

For hot items like holiday best-sellers, he said sometimes gain an edge on large retailers, who often purchase inventory in one bulk order and sell out quickly. After that, smaller retailers can sell their inventory, usually for slightly higher prices.

Kim only transitioned from a retail business to wholesaling in the Toy District two years ago. Despite the challenges, he said he is excited to be a business owner in the neighborhood.

“Downtown L.A. industry is so unique because everything is so fast,” Kim said. “There’s more of that culture here. When you’re in the Toy District, people just know where to go.” 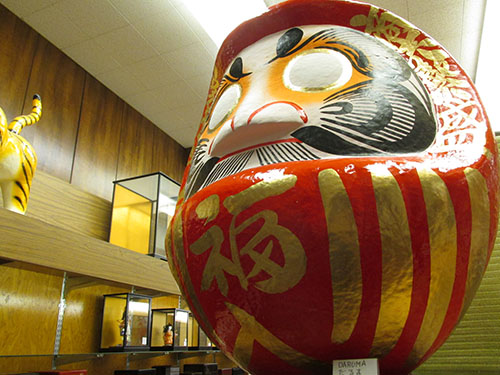 Bunkado carries several Buddhist items such as the Daruma doll, modeled after the founder of the Zen sect of Buddhism. 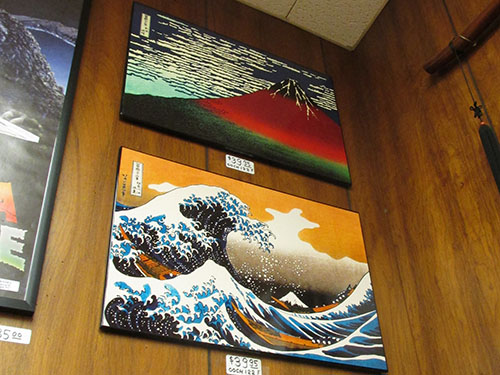 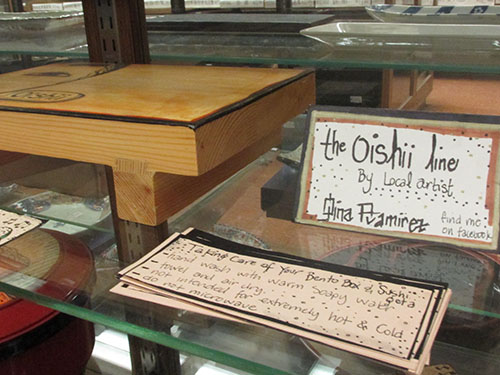 Bunkado serves as an outlet for selected local artisans to sell their wares, like this handmade bento box, a hot seller. 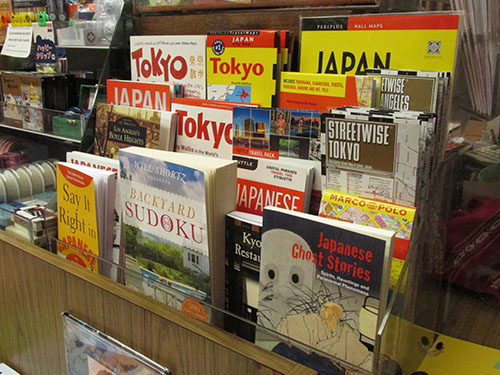 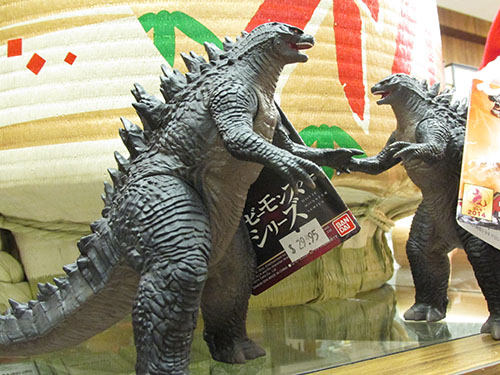 Among the toys and trinkets at Bunkado are plenty of collectibles from Japanese pop culture such as these Godzilla figurines. 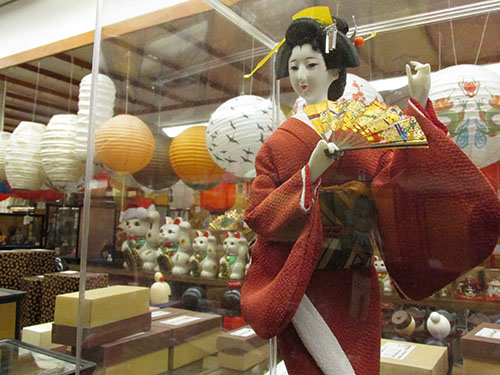 Traditional Japanese dolls such as this handcrafted Japanese geisha doll often fetch a high price from collectors and enthusiasts. 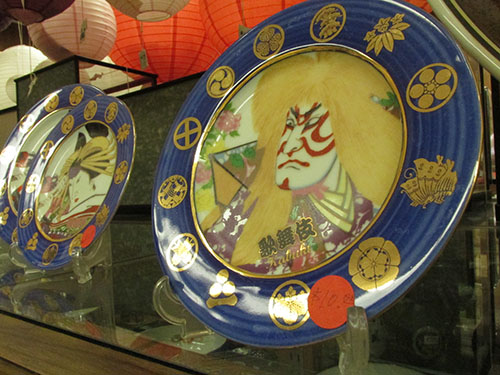 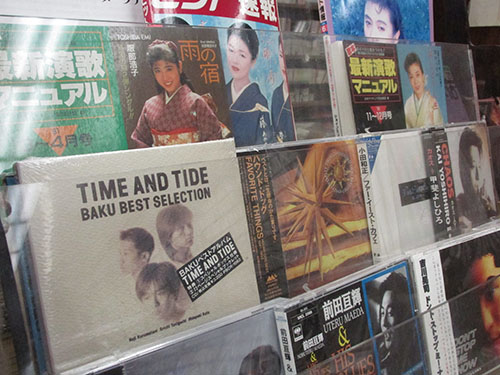 Bunkado was once a major retailer of Japanese music but now carries mostly unsold stock being sold for bargain-bin prices.