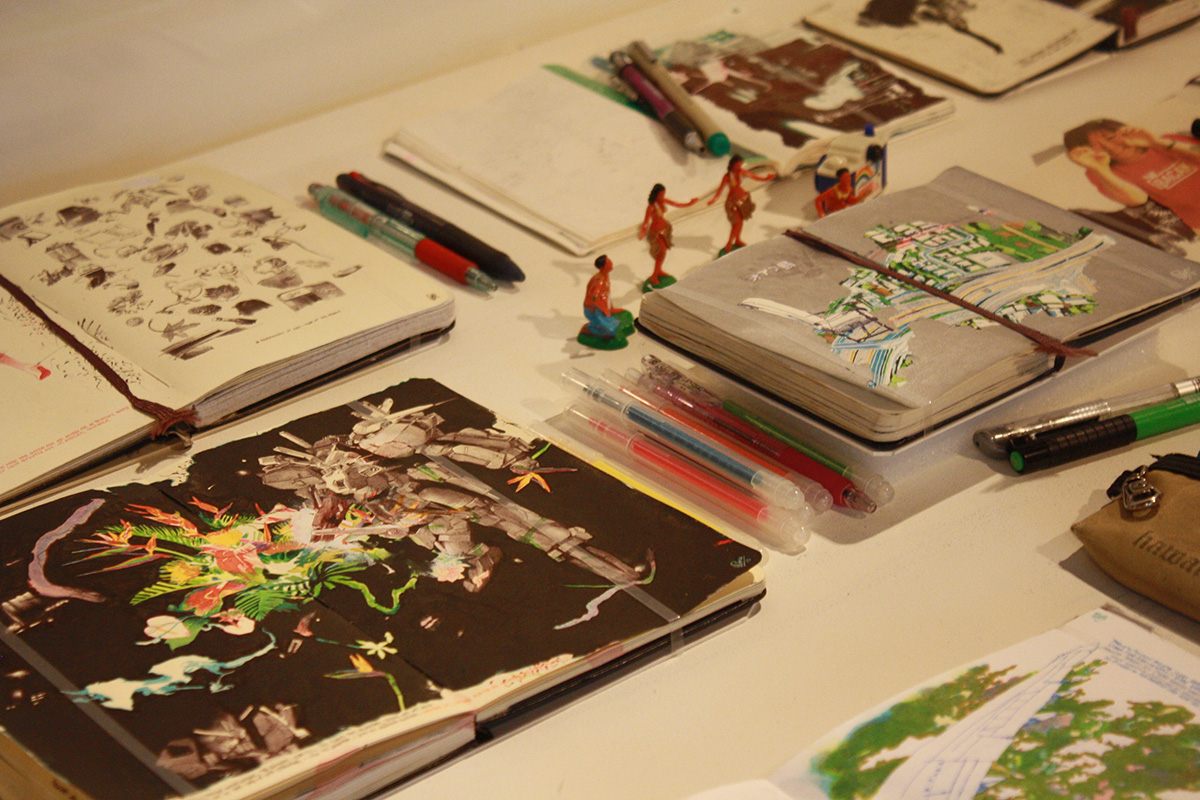 The art exhibits at the Japanese American National Museum in Little Tokyo may rotate periodically, but each has the same goal: to provide a temporary home and an audience for the works of Asian American and Asian artists.

Artworks of immeasurable varieties and artists of all creeds are welcomed into the space. This season’s rotation is Giant Robot Biennale 4, which runs from Oct. 11 to Jan. 24 and features works ranging from Jim Lee’s X-Men comic reproductions to Shizu Saldamando’s colored pencil and mixed media pieces that offer a shimmering glimmer of insight into the world of the half Japanese American, half Mexican American artist.

"It’s just an alternative of my life, very personal," a pre-recorded Saldamando said in her rendition of the museum’s "Guide by Cell," a virtual information base accessed through a cellphone.

The name Giant Robot refers to the magazine created by Eric Nakamura in 1994 that focuses on Asian popular culture. Since its inception, the publication has expanded to retail stores, restaurants and galleries across the United States.

The exhibition at the Japanese American National Museum features a recreation of a Giant Robot store, with one display of the shop’s 50 most important items handpicked by Nakamura.

"The idea was to give you an idea of what kind of items we might sell, and what kind of things have been influential in the history of Giant Robot," said Nakamura in his "Guide by Cell" portion.

Other displays include kozyndan’s "Heat Run Samadhi," which depicts an aquatic scene expanding up one wall, down to the floor and up a second wall, a recreation of artist Edwin Ushiro’s art studio that includes some of his completed pieces, a series of eclectic digital prints by artist Ray Potes, also known as Hamburger Eyes and a watercolor and colored pencil paper sculpture by Rob Sato, which includes little humanlike figurines.

Two floors total, the exhibits on the second level live just a room away from the permanent ones, which detail historical prejudice against the minority group, the events of World War II and the internment of Japanese Americans. A significant portion of the permanent displays are dedicated to Sansei, or third generation, Japanese Americans, defined as the group of individuals born to parents while or shortly after internment took place.

"This third generation has started to kind of try to go back and learn the history, even if the parents weren’t talking about it," said Koji Sakai, the Vice President of Programs at the museum.

One such exhibit displaying a physical manifestation of the Sansei artists Robert Y. Hasuike, Lance Matushita, Dennis Masai and Jerry Teshima’s historical curiosity features a to scale reproduction of Manzanar, the California internment camp where more than 110,000 men, women, and children were detained from 1942 to 1945.

Though the United States' 1952 Walter-McCarran Immigration and Naturalization Act allowed so-called Japanese aliens to become naturalized citizens, the generations living during that time and following thereafter struggled and are still struggling to define a space for themselves in American culture.

That’s why places like the Japanese American National Museum and exhibits like Giant Robot are critical, said Sakai.

"Sometimes it’s really frustrating because we’re just kind of like screaming into the wind. Just 10 years ago, there wasn’t a space like this. I always joke to Asian American artists if there weren’t a space like this, where would you be showing your work?"

But some of the artists featured have made big names for themselves. Koreatown native David Choe, for example, who created the now-famous murals at Facebook, has done several projects in collaboration with the museum.

Moreover, patrons who do come seem dedicated to the museum and its mission.

"The Japanese American National Museum is a treasure, in my opinion, to the art scene and Los Angeles, because they bring in more outsider art than you generally would see at, say, LACMA and MOCA," said visitor Cheri Keating, who is an artist herself. "They’ve been hosting the Giant Robot Biennale and also, not too long ago, they had Perseverance, which was the tattoo show about how Japanese tattoo arts have influenced the resurgence of tattoo art in America. I myself am tattooed heavily, and it’s all informed by Japanese art."

Still, the representation of Asian Americans in artistic fields is not yet proportional to the percentage of Asian Americans in the U.S. population. For example, USC Annenberg’s Media, Diversity, & Social Change Initiative conducted a study that found only 5.3 percent of characters in the top 100 films of 2014 were Asian and over 40 movies sampled did not depict a single Asian speaking character. Furthermore, only 19 Asian directors worked across the 700 top-grossing films, only one of those being female.

Despite the odds and his own occasional woes about the current representation, Sakai, who also works as a screenwriter, spends most of his time remaining hopeful.

"When I see these artists, the inspiration it gives me is that it’s going to get better,” he said. “Our voice will be heard more; people will be more interested. I think that all the voices are important, and part of what’s great about being American is that all of our voices together are stronger than just one voice or two voices. That’s what I love about working here and as a writer, what it means to me is that my voice can be heard; my voice is part of the conversation."